The Musée des Arts Décoratifs in Paris is simply divine!  I have visited Paris over a dozen times, and finally made space in my schedule to admire the priceless Decorative Arts in one of the best museums in Paris.  Let’s take a closer look!

I’m a gal who loves learning about History through the lens of the Decorative Arts.  I remember my college days at Vanderbilt, where I was an Art History Major.  Classes were always at 8 am and held in a dark room, as slides were our textbooks.  And my favorite class was the History of Decorative Arts.

The decorative arts are arts or crafts whose object is the design and manufacture of objects that are both beautiful and functional.  And design and function can tell you a lot about a particular Historical time period. So furnishings have as much to show us and teach us as buildings, or major battles, or fine art.

The Musée des Arts Décoratifs is one of the best museums in Paris for those who enjoy room after room after room filled with gorgeous objects.  Furniture, mirrors, fully reconstructed rooms, and objects that are simply for decoration, comprise an entire wing of what once was the Louvre Palace.

Let’s take a closer look at some of the particular decorative arts pieces that I found especially amazing.

Every kind of chair design you can imagine!

Examples of different styles of decorating.

The Best Museums in Paris Have a History

The Musée des Arts Décoratifs is one of the best museums in Paris, and I also think the history of the building itself is fascinating!

In 1546 Francis I, who was a great art collector, had an old castle razed, and began to build on its site another royal residence, the Louvre.  Almost every subsequent French monarch added onto the Louvre. Under Francis I, only a small portion of the present Louvre was completed.  This original section is today the southwestern part of the Cour Carrée.

In the 17th century, major additions were made to the building complex by Louis XIII and Louis XIV. Cardinal de Richelieu, the chief minister of Louis XIII, acquired great works of art for the king. Louis XIV and his minister, Cardinal Mazarin, acquired outstanding art collections, including that of Charles I of England.

The Louvre ceased to be a royal residence when Louis XIV moved his court to Versailles in 1682. The idea of using the Louvre as a public museum originated in the 18th century.

The comte d’Angiviller helped build and plan the Grande Galerie and continued to acquire major works of art, planting the seeds for the Louvre to be one of the best museums in Paris. In 1793 the revolutionary government opened to the public the Musée Central des Arts in the Grande Galerie.

Under Napoleon the Cour Carrée and a wing on the north along the rue de Rivoli were begun, which is where The Musée des Arts Décoratifs is today . In the 19th century two major wings, their galleries and pavilions extending west, were completed, and Napoleon III was responsible for the exhibition that opened them. The completed Louvre was a vast complex of buildings forming two main quadrilaterals and enclosing two large courtyards. 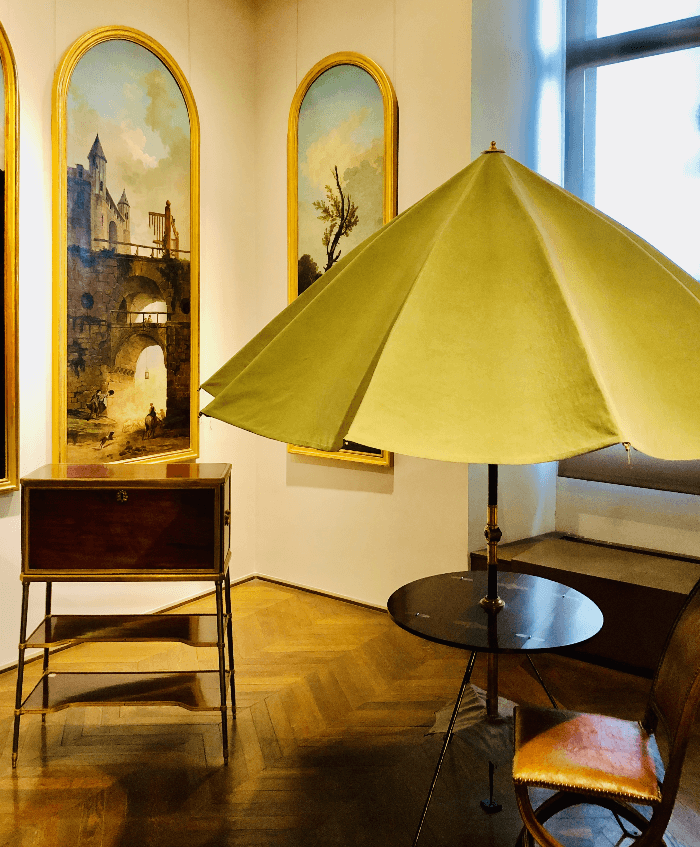 A rare example of an 18th Century sun umbrella and chair.

How to Visit The Decorate Arts Museum in Paris

SPECIAL EXHIBITS:  Like many museums, there are several ticket options.  Options for the permanent collection, and then often an additional cost for a special exhibit.  In November 2019, we were fortunate to experience the “Walk and Walk:  A History of Footware.”  Totally fabulous exhibit, with some of the oldest shoes in existence on display, as well as many interesting “famous” shoes.  Runs through February 2020.

HOURS OF OPERATION:  Typically the Decorative Arts Museum is open Tuesday-Sunday, 11:00-6:00.  But, always check the web site, as there can be unexpected closures or shortened hours. 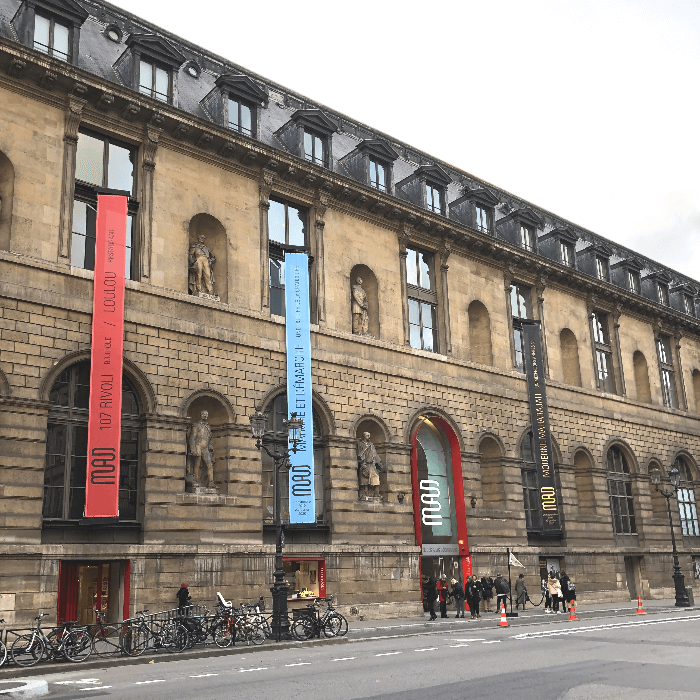 I love to admire decorative arts!  And the Decorative Arts Museum should absolutely be on your list if you do as well.  You might also want to consider visiting the Jaquemart-Andre Museum, which is a private home, turned museum, that will appeal to anyone who has an interest in the Decorative Arts.  I think it’s WONDERFUL, and the cafe is of one my favorite spots for lunch while in Paris!

Paris is one of my favorite cities on Earth!  Enjoy your time in this gorgeous city!