West of London lies one of the prettiest regions of England, the Cotswolds.  Bath is a charming and picturesque city in the Cotswolds.  The London to Bath Day Trip is well worth a day’s travel, simply to experience The Roman Baths, The Royal Crescent, Bath Abbey, The Pulteney Bridge and lunch or tea at The Pump Room!  Plus….for fans of the hit Netflix Series “Bridgerton”, many scenes were filmed in Bath!  Here’s everything you need to know!

In 2019, my husband and I spent a week in London.  We’ve been a few times before, so this trip we wanted to take a few day trips and explore important sites outside of London.  Bath was at the top of our must-door list!

It’s SUPER easy to travel from London to Bath by train!  From Paddington Station, there were trains leaving about every hour, and the trip itself takes around 90 minutes.  You can book a ticket online, or simply find the ticket kiosks inside Paddington Station, and purchase a ticket when you arrive.

You do not need a car at all to enjoy Bath.  It’s a very walkable city, and most of the important sites are in the city’s historic center.

We visited in mid-November, so the tourist crowds were very minimal.  I can imagine in the summer months it’s totally different story, though.  That’s one of the advantages of being an Empty Nester!  We don’t have to travel during peak tourist season when the kids are out of school.

While enjoying this London Day Trip to Bath, we enjoyed the following sites, and I will walk you through each one:  Bath Abbey, The Roman Baths, The Pump Room, The Royal Crescent, and Pulteney Bridge.

And…for those of you who are fans of the NETFLIX series “Bridgerton”, read on for tips and insights, as many scenes in this wildly popular series were filmed in Bath!

Since I’m curious, my first questions is:  what is the difference between a Cathedral and an Abbey?

Simply said, an abbey is like a monastery under the direct supervision of its abbess (the spiritual mother) and or the abbot (the spiritual father), the abbey is where the religious (monks and the like) dwell. In this place, there are lots of them, at least a dozen. Abbeys, as a structure or place, is a group of infrastructures that comprises many minor buildings like a separate monastery, convent, place to receive gifts from offerers from the outside, and of course a place of worship.

Cathedral is more closely likened to a typical church. But unlike most churches, the cathedral is considered as the principal church (the major) religious establishment in a certain diocese. It may not be the biggest church in the city but it does house the throne of the bishop. And unlike abbeys, cathedrals are led by the bishops. Although the cathedral is also a center for many functions both civic and social, the main purpose for erecting a cathedral is to serve as a place for worship.

Having cleared that up, I highly recommend spending time inside the gorgeous Bath Abbey.  Currently it’s under restoration, but it’s absolutely worth visiting anyway.  The Abbey can trace its roots back to 675 A.D.  And the stained glass windows and the fan vaulted ceiling are, as I said earlier, gorgeous.

I particularly enjoyed reading the many memorials on the Abbey’s walls. There are 635, and most commemorate people from the 1700s and 1800s. Through the memorials, we learn about their lives, loves, and belief in the Christian hope of resurrection.

Will and I were pleasantly surprised by the many volunteers inside the Abbey, who were delighted to answer each and every question we had, and were the kind of people you’d like to sit and have a cup of tea with!  I’m not kidding.  They were SO nice!!! 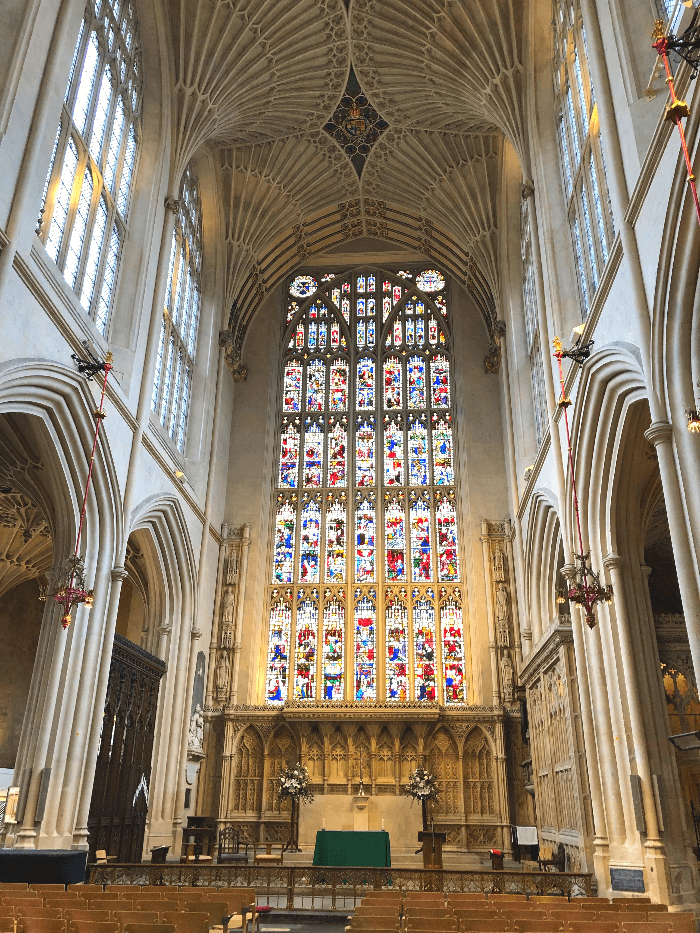 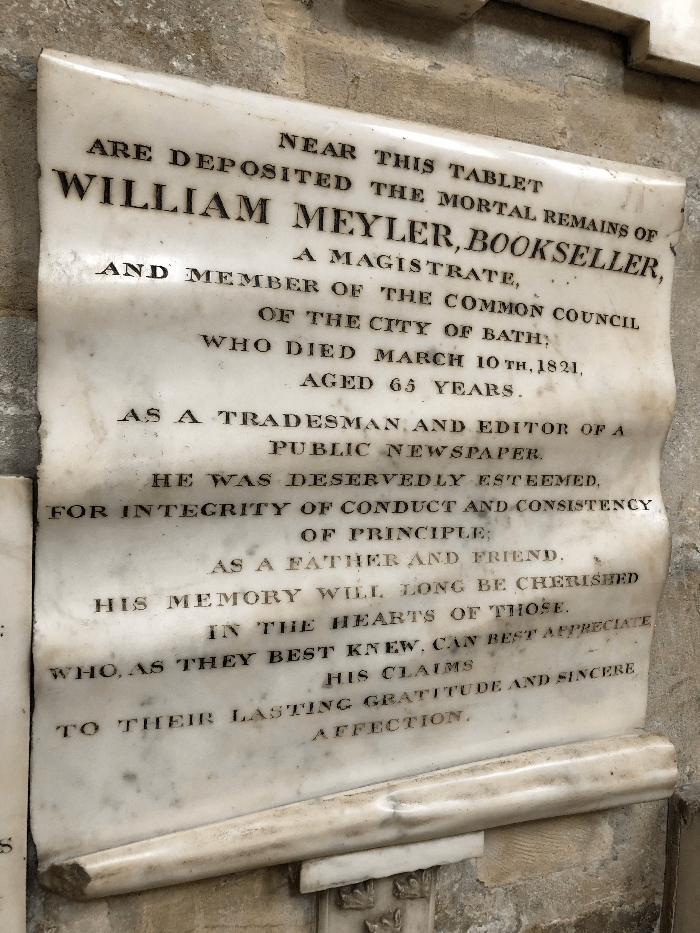 What an amazing man he must have been! Such kind words!

Certainly, the main attraction in Bath is The Roman Baths.  And, a visit here is simply amazing.

The Roman Baths is one of the finest historic sites in Northern Europe. The site consists of the remarkably preserved remains of one of the greatest religious spas of the ancient world. The city’s unique thermal springs rise in the site and the Baths still flow with natural hot water.

Visitors can explore the Roman Baths, walk on the original Roman pavements and see the ruins of the Temple of Sulis Minerva. The museum collection, located next to the bathing complex, includes a gilt bronze head of the Goddess Sulis Minerva, and other Roman artifacts.

The Roman Baths attracts over one million visitors a year – making it one of the most visited heritage attractions in the United Kingdom.  Again, we were glad to be there during a non-peak tourist time!

I would plan to spend at least two hours visiting The Roman Baths, and the audio guide is essential for fully enjoying every aspect of this ancient Roman site. 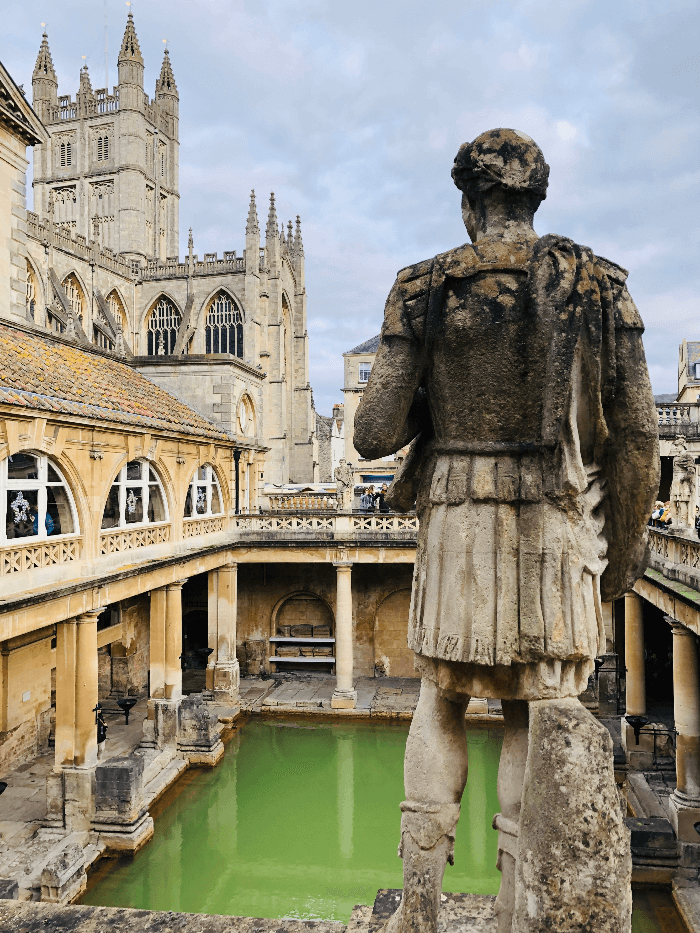 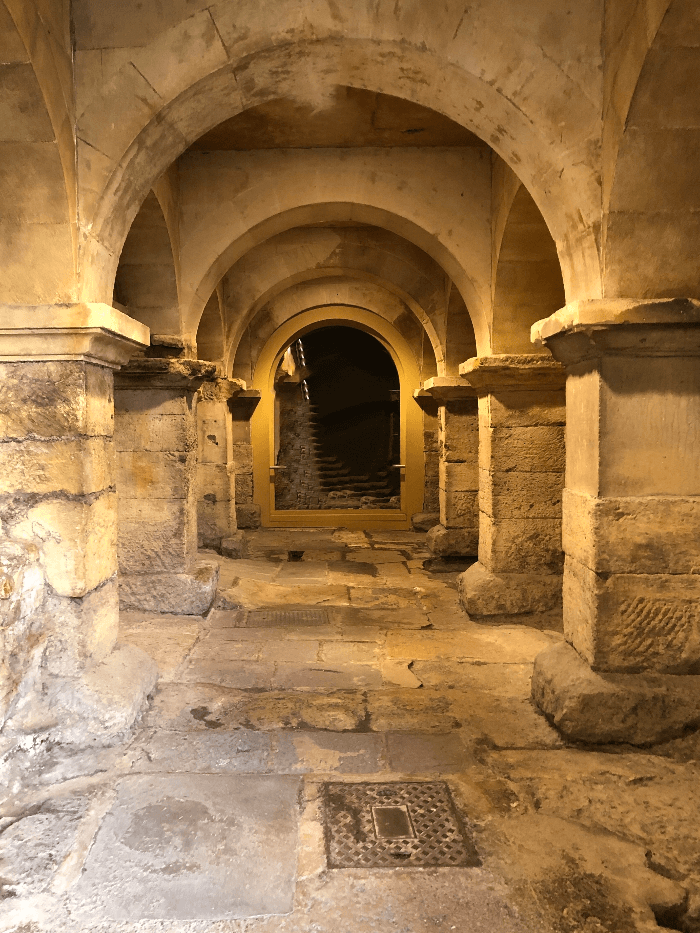 The Roman Baths are beautifully preserved!

Full disclosure.  Visiting The Royal Crescent is about a mile walk….uphill from the Historic Center.  But, it’s 100% worth it…and let’s face it.  You know you’ve eaten a few scones and clotted creme while in England, so a little walk uphill might be in order.  Just sayin’.

The day we spent in Bath, we happened to stumble upon a huge film crew and actors in period costumes all around The Royal Crescent.  At the time, we had no idea we were witnessing the filming of the NETFLIX series “Bridgerton”.  Fast forward to 2021, and all was revealed!  We watched the filming for a few hours, from several different locations, as the crew allowed tourists (and residents) to pass by when the cameras weren’t rolling!

The Royal Crescent is a row of 30 terraced houses laid out in a sweeping crescent. Designed by the architect John Wood, the Younger and built between 1767 and 1774, it is among the greatest examples of Georgian architecture to be found in the United Kingdom. Although some changes have been made to the various interiors over the years, the Georgian stone façade remains much as it was when first built.

Many notable people have either lived or stayed in the Royal Crescent since it was built over 240 years ago, and some are commemorated on special plaques attached to the relevant buildings. Of the crescent’s 30 townhouses, 10 are still full-size townhouses; 18 have been split into flats of various sizes; one is the No. 1 Royal Crescent museum and the large central house at number 16 is the Royal Crescent Hotel & Spa.

Unfortunately, we were not able to visit the museum while there, as Netflix was filming a period piece, and no through-traffic was allowed.  Bummer.

But, we did cut through the Royal Crescent Hotel & Spa to get to the back side of The Royal Crescent, and THAT is where I want to stay when I go back for a longer stay in the Cotswolds!!! 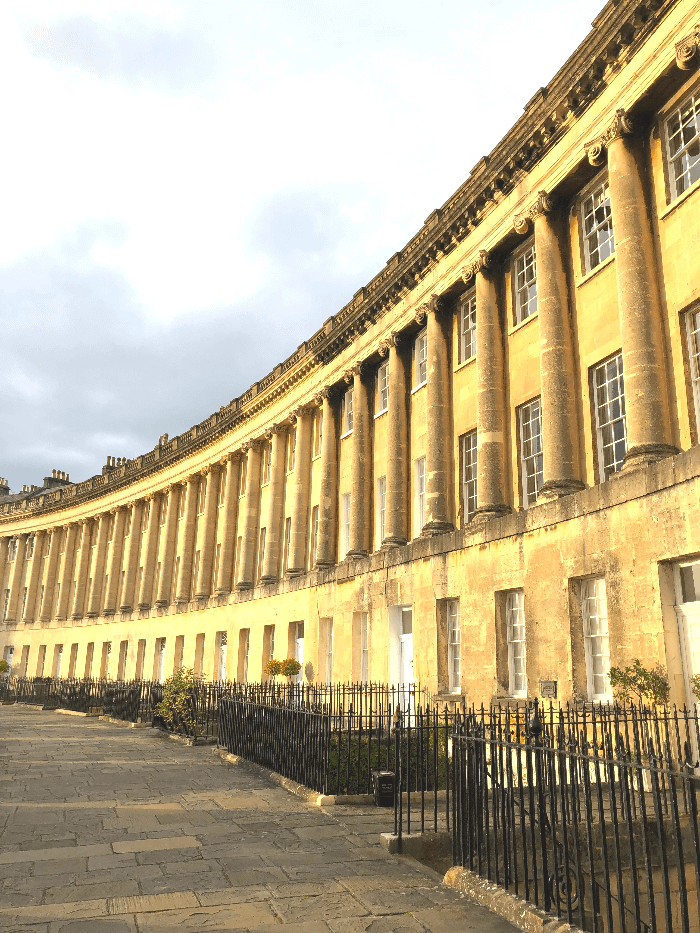 The Royal Crescent in Bath

The final historic site we enjoyed on our London to Bath Day Trip was the Pulteney Bridge, which crosses the River Avon. It was completed by 1774, and connected the city with the land of the Pulteney family. Designed by Robert Adam in a Palladian style, it is exceptional in having shops built across its full span on both sides, like the Ponte Vecchio in Florence, Italy.  It’s really charming, and the shops along the bridge include many souvenir shops, gift shops, and tea rooms. 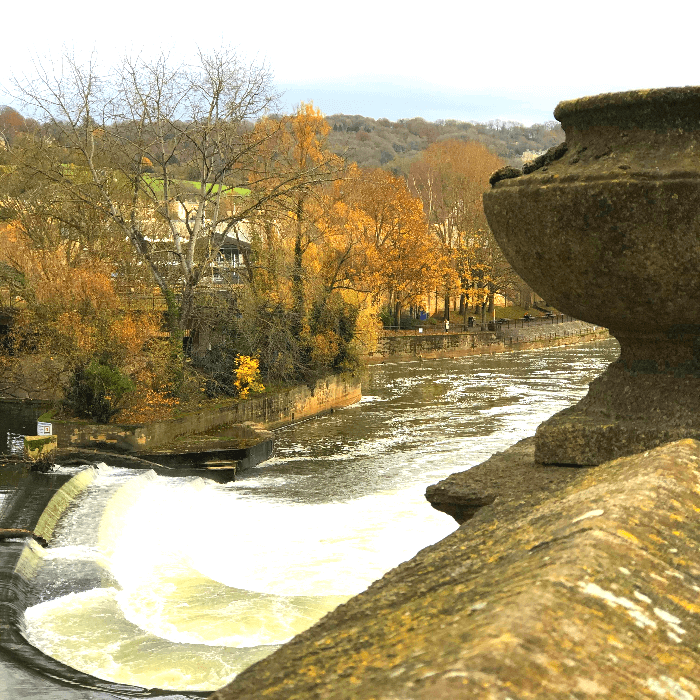 The Grand Pump Room was built in the early 1790s, and soon became the destination for high society to meet and ‘take the waters’ from the hot springs while enjoying lavish entertainment. Famous authors such as Jane Austen mentioned it in her novels Northanger Abbey and Persuasion, as the place where “every creature in Bath was to be seen…”. And Mary Shelley wrote the iconic Frankenstein while staying in lodgings next door. Over 200 years later, most of the neo-classical style and Georgian features remain unchanged – creating the perfect ambience in which to enjoy the quintessentially English custom of afternoon tea.

During the day the Pump Room restaurant is open for breakfast, lunch and afternoon tea. At certain times of the year (Easter, July, and August,) the restaurant opens in the evening for late tea and dinner. There is also the opportunity to enjoy special Torchlit Terrace Dining during December.

The Pump Room Trio or pianist plays every day to add to your enjoyment.  Will and I enjoyed Brunch the day we visited, and the space was decked out in charming Christmas decor.  We loved every minute and every bite!  I highly encourage this dining experience!  Make reservations on Open Table.

The street in front of The Pump Room is another filming location used many times in “Bridgerton”.  In fact, many of the scenes where the actors were walking around town were filmed in the area around The Pump Room. 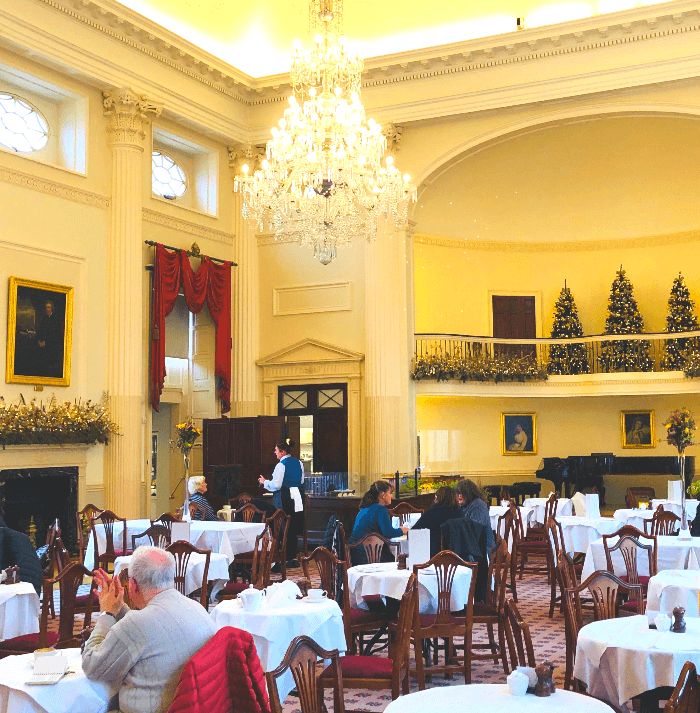 We spent about 7 hours in Bath, and experienced everything I described above.  However, there are some sites we missed worth mentioning:

I encourage you to plan a London to Bath Day Trip!  And let me know what you discover in Bath!!! 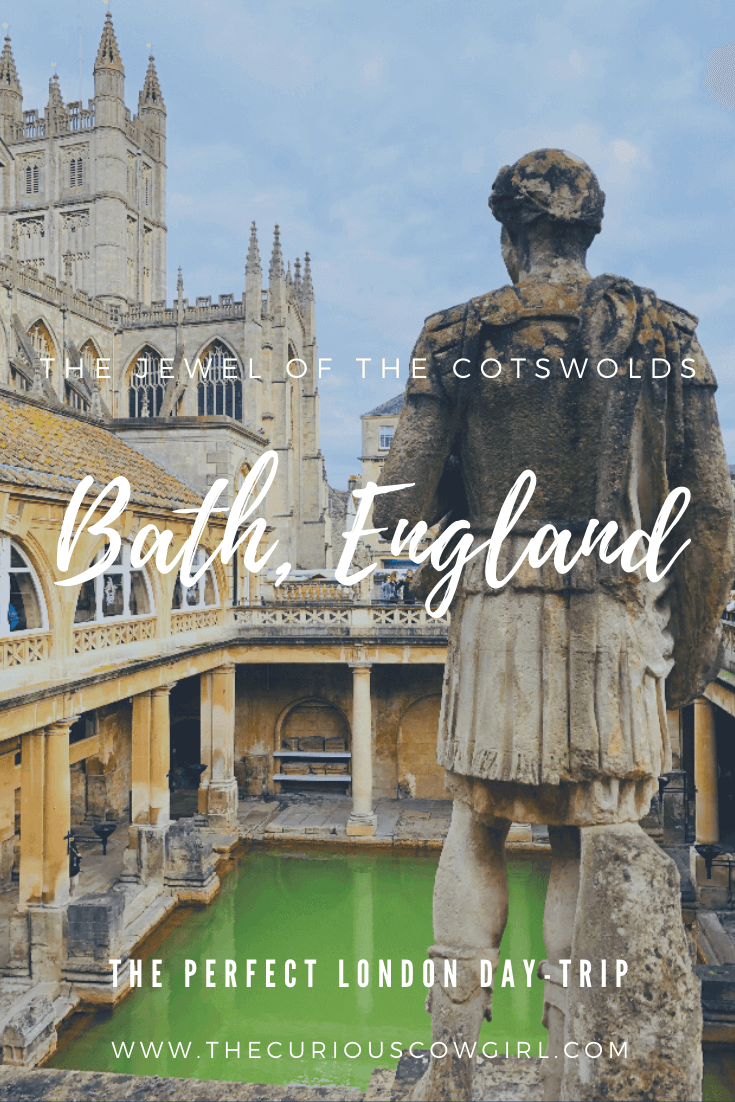