It only seems fitting that The Curious Cowgirl should provide a little information to her readers about Cowboy Culture!  I get asked quite a bit about the best places to spot real cowboys, cowboy history, and historical cowboys familiar to many people.  Clearly, Texas and Oklahoma should be at the top of any list, if you are in search of the real-deal Cowboy Culture!

If you think real cowboys only exist in the movies, think again Pardner…..cowboy culture is alive and well, especially in Texas and Oklahoma.  From ranching to rodeos.  From stockyards to wide open prairies that go on for miles and miles, it’s 100% possible to experience cowboy culture and see real cowboys for yourself.  Here’s a few event-based recommendations.

One of the most beloved experiences is attending the nationally famous musical outdoor stage show, “Texas!” In 1960, Margaret Harper read an article in Reader’s Digest about a playwright and author named Paul Green who recreated the history of several regions about the nation in tremendous dramas with pageantry and music.

Mrs.Harper wrote to Paul Green and began corresponding with him about the land, people and beauty of Palo Duro Canyon. As interest in the prospect of an outdoor theater began to grow, a small group of Canyon families funded the first trip for Paul Green to come to the Panhandle later that year. Mr. Green immediately dedicated himself to the project of bringing the history of the High Plains to the stage. The support organization eventually expanded to include Amarillo and all the surrounding area.  It’s awesome!  Because….we love Texas!

My friends north of the Red River would be unhappy if I did not include encouragement to see the musical “Oklahoma.”  “Oklahoma!” was Richard Rodgers’ first collaboration without his long time partner, lyricist Lorenz (Larry) Hart. The prolific team of Rodgers and Hart had lasted a quarter of a century, giving birth to some of America’s greatest songs.

The premise for “Oklahoma!” spawned from a 1931 play by Lynn Riggs, “Green Grow the Lilacs,” which had not done very well, running only 62 performances.  The play was set in the area where Riggs was born and raised, the Indian Territory of Oklahoma at the turn of the century.  Agnes De Mille’s choreography was one of the show’s major innovations. And, you can see original musical costumes at the Oklahoma City History Center.

Oklahoma’s record run of five years and nine months on Broadway was unbroken until My Fair Lady, opening in 1956, finally broke it in 1961. The original production of Oklahoma ran 2,248 performances, including over 40 special matinees for people in the armed forces. It played to nearly 5 million people during the original run, and to over 10 million in its first national road tour, which lasted from 1943 to 1954.

The jury is still out on whether or not the cowman and farmer can be friends…..but I digress. 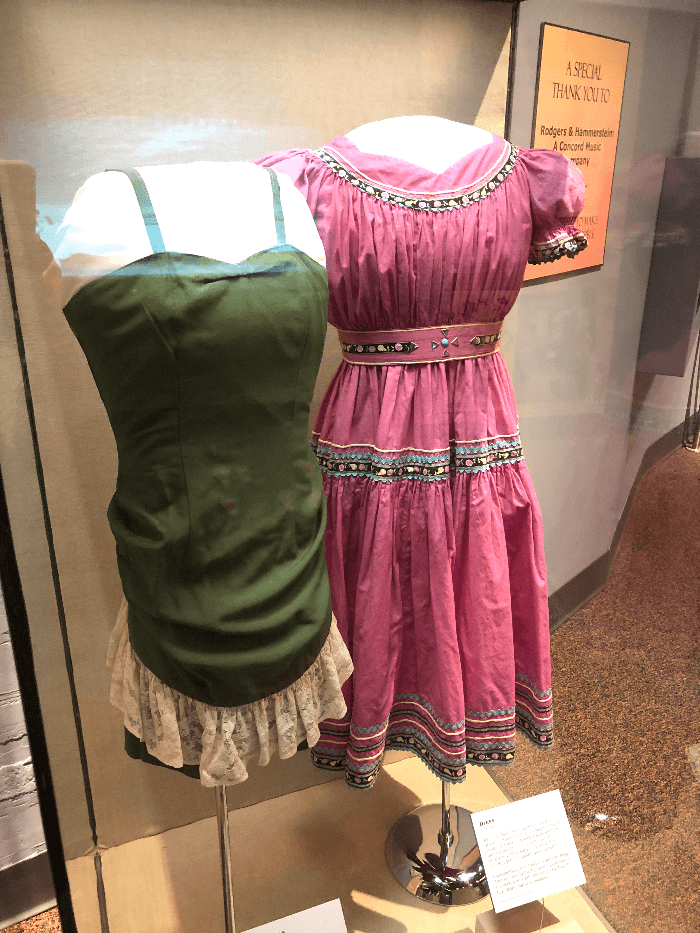 The English word cowboy was derived from vaquero, a Spanish word for an individual who managed cattle while mounted on horseback. Vaquero was derived from vaca, meaning “cow,” which came from the Latin word vacca. “Cowboy” was first used in print by Jonathan Swift in 1725, referring to a boy tending cows.

There’s so many ways and locations to learn more about Cowboy History.  Here’s a few ideas:

Historic Murals:  According to the web site Texas Time Travel, “the tradition of mural painting in Texas, much of it accomplished during the early part of the 20th century, derived its inspiration from the great muralists of Mexico. Painters like Diego Rivera and Jose Clemente Orozco, who illustrated halls and walls across our nation and Mexico with social and political commentary, served to inspire Texas muralists.   This is an excellent web site, documenting murals reflecting Cowboy culture in El Paso, Marfa, Odessa, Tyler, and many other Texas cities and towns.

More than 40 painters employed through Roosevelt’s Public Works of Art Project, a Depression-era back-to-work program for artists designed to decorate public buildings throughout the nation. A more permanent program followed, and post offices and federal buildings in communities across Texas benefited significantly from the project.”  This web site details murals in Post Offices across the United States.

Some of my favorite murals are inside the Texas Hall of State at Fair Park in Dallas.  They are simply gorgeous!  Painted by Eugene Savage of New York, a professor of painting at Yale University in Connecticut. Each mural measures 30 feet by 80 feet. They were completed by Savage in just five months with the help of two Texas artists: James Buchanan “Buck” Winn, Jr. and Reveau Bassett. 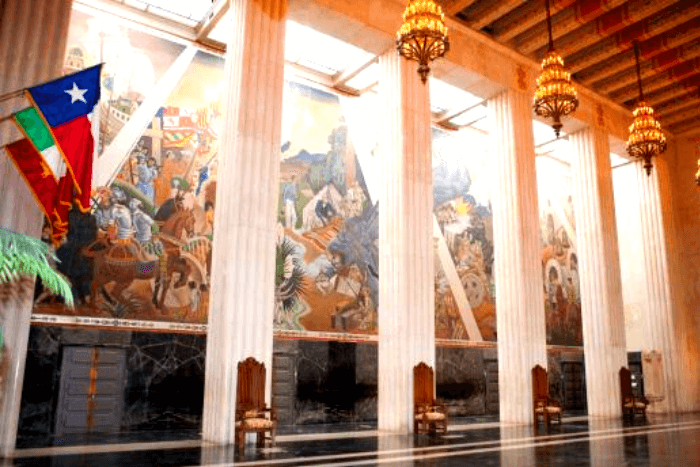 If you attend the Ft. Worth Stock Show and Rodeo, take the time to admire the exterior murals at the Dickies Arena.  Rising above the south entrance is a large-scale mural created by William Matthews, one of the country’s best-known contemporary Western artists, which highlights a lively scene celebrating the American West. Working primarily in watercolor, Matthews artwork is prominently displayed in private and public collections, including the Denver Art Museum and National Cowboy & Western Heritage Museum in Oklahoma City, which I visited in December 2019.

If you attend the San Antonio Stock Show and Rodeo, you can admire Texas painter Howard Cook who accomplished a 16-panel epic titled “San Antonio’s Importance in Texas History” across the foyer of the San Antonio Federal Building.

In Oklahoma, “The Scene Changes” the beautiful mural in the Cordell Post Office depicts a cowboy and a Native American on horseback.  And there are many others throughout Oklahoma.  Seems like a good excuse for a road-trip to me!

Museums are an excellent way to catch a glimpse of Cowboy History.  From preserved artifacts, to clothing, to sculpture and paintings, any of these museums are worth your time to visit!!  I have personally visited all the museums I am recommending, and as I experience others worth recommending, I’ll continue to update this list. 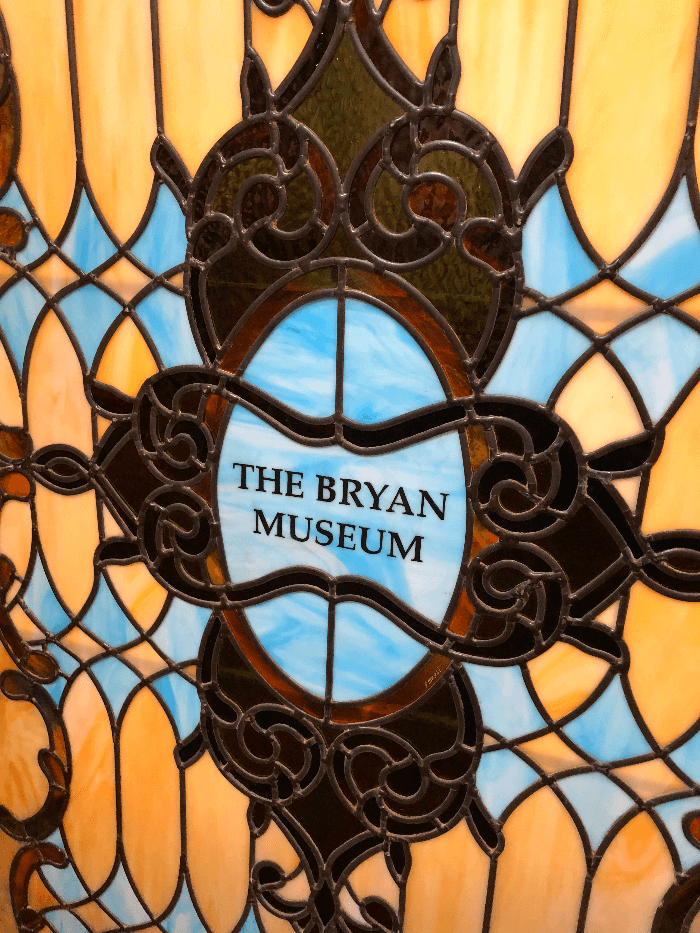 Whew!  Alrighty!  That’s a whole lot of Texas and Oklahoma to discover. So, strap on your boots, dust off that ten-gallon hat, and get after it y’all!