One of the most popular annual attractions in NYC, and a favorite TV activity of mine, is the Macy’s Thanksgiving Day Parade.  Since 1924, more than 3.5 million people fill the streets of Manhattan every year to watch.  If you are planning to experience the Macy’s Parade live, you need a strategy!  Here’s everything you need to know including, the Macy’s Thanksgiving Day Parade Route, the Parade Hours, best Viewing Locations, and Parade Hotels along the route!

The Macy’s Thanksgiving Parade combines a huge collection of performers, participants, and of course, the famous big balloons that are the signature of this event in NYC.  The Macys Thanksgiving Parade features more than 1,500 dancers and cheerleaders, close to 1,000 clowns, almost 30 parade floats, a dozen marching bands, and nearly 8,000 participants in all.  This amazing NYC spectacle is one of the most popular events in New York City and easily the most famous parade in the country.

But, this is not an event to experience Live, without a plan!  Let’s get you organized!

At Columbus Circle, the Parade will then turn EAST onto Central Park South instead of heading down Broadway. When the Parade reaches 6th Avenue, it turns south to 34th Street. At 34th Street it heads west to Macy’s Herald Square and ends at 34th Street and Seventh Avenue at around noon.

So, where along the route should you plan on viewing the parade? Get the best view of the Macys Thanksgiving Day Parade between 72nd Street/Central Park West and 61st Street. The parade route is closed to the public for broadcasting purposes between 34th Street and 38th Street on 6th Avenue, as well as 34th Street between Broadway and 7th Avenue.

Avoid the Official Viewing Area we are used to seeing on TV!  The Macy’s Thanksgiving Day Parade official viewing area on 34th Street is the most crowded area.

The best advice is to get there early! The Macy’s Thanksgiving Parade Route begins on 77th Street and Central Park West at 9am sharp and it runs until about noon. It is recommended that parade-goers arrive at the  Macy’s Thanksgiving Parade no later than 6:30am to get the best viewing spots available.  Macy’s Day Parade organizers recommend you leave your lawn chair at home.

Y’all know I always recommend taking the subway around NYC, and this day is no exception.  But, the Macy’s Parade draws huge crowds, so be advised of the following:

New York City subways will run on a Sunday schedule on Thanksgiving Day, though the 42nd Street shuttle and the 1 line will see increased service to ferry spectators to the parade. Some station entrances will be closed at 59th Street-Columbus Circle, while certain entrances and exits will be shut at Penn Station and along the B/D/F/M line.

The Best Outfit for the Day

The main objective:  Stay Warm: After all, November in New York City can get chilly. The Macy’s Thanksgiving  Day Parade lasts from 9am- 12pm, so make sure to layer up and keep warm.

If you need some cute Turkey hats (and who doesn’t, really….) then check out E.A.T. Gifts on Madison Avenue, or their smaller shop in Grand Central Terminal.  They always have hysterical holiday-themed hats and headbands!

The Thanksgiving Parade Balloons can be enjoyed the Night Before as they are being inflated!  Get a sneak peek at the inflation of more than 30 signature Thanksgiving Day Parade balloons the night before the event. Between 3pm- 10pm, a free viewing of the famous big balloon inflation is available to the public on 77th and 81st streets between Central Park West and Columbus Avenue. 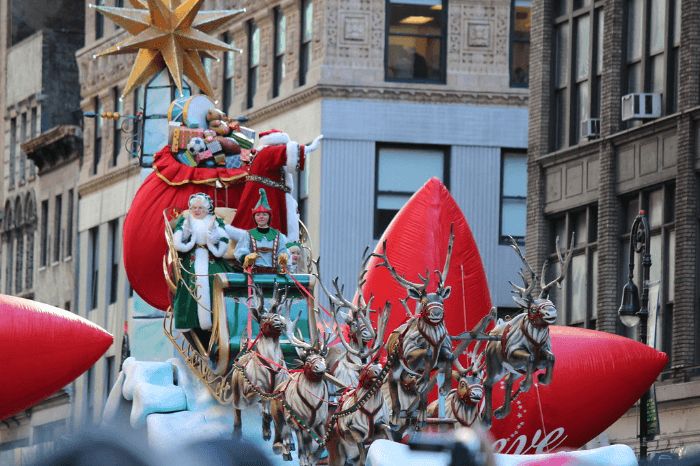 The most stress-free way to view the Parade is to splurge on a parade view hotel room along the Macy’s Thanksgiving Day Parade.  Obviously, this is a hugely popular time of the year to visit NYC, so make your reservations by calling the Hotel directly, as you will want a room that faces the route.  Or, some hotels offer guest-only sidewalk access, special packages, or viewing from inside the Lobby.  Best to call and ask all your questions before booking.  Here’s a few hotel suggestions:

There’s so much Jolliness this time of year in NYC!  If the parade has not totally worn you out, check out my recommendations for other Christmas Activities in NYC.

And, you will for sure want to get your own copy of my NYC Restaurant Guide!  Updated recently, I have over 30 suggestions, organized by neighborhood. 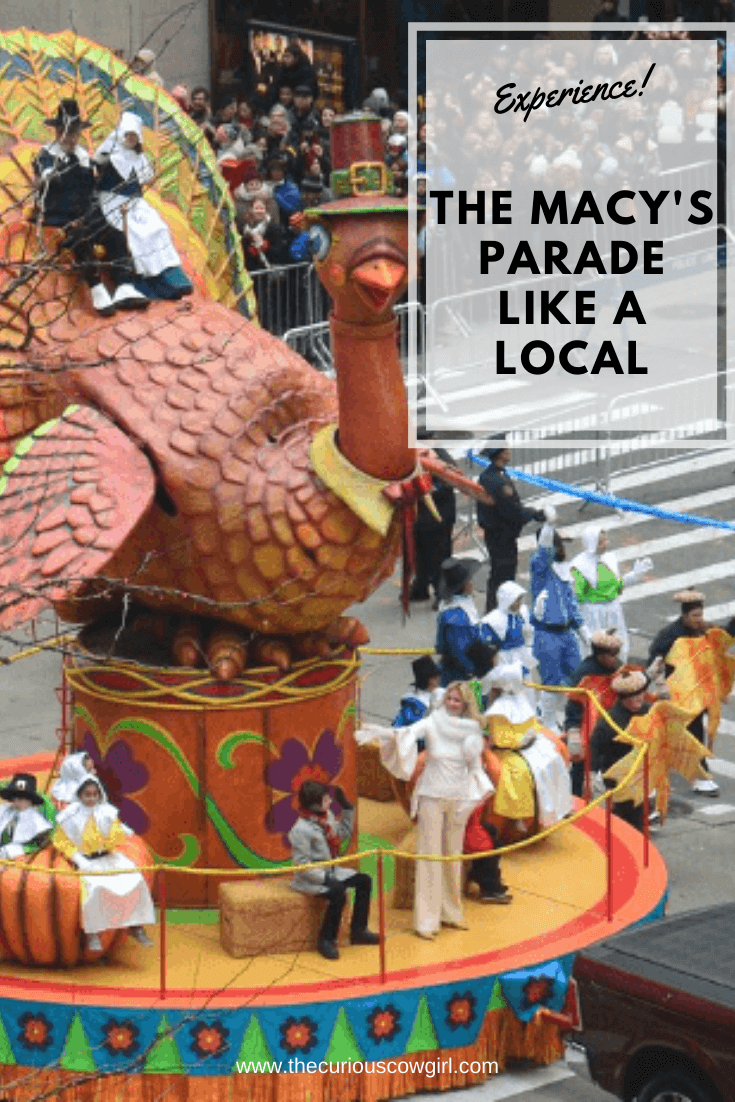