I know, I know.  For many of y’all, Early American History Sites in NYC are not at the top of your must-see list.  Broadway, great restaurants, and the many fantastic NYC museums are most popular.  But while you are making your way around Manhattan, there are several Historical Sites in NYC.  And….brace yourself….there are interesting Alexander Hamilton Sites as well.  Let’s take a look!

We must begin with a brief History lesson…..’cause y’all know how I roll.

The first European explorer to arrive in New York Bay in 1524 in the service of the French crown was the navigator Giovanni da Verrazzano. The area, which he named New Angoulême, was inhabited by the Algonquins and Iroquois Native Americans.

In 1626, Peter Minuit, Governor of the Dutch West India Company bought the island of Manhattan from Native Americans for 24 dollars and founded a colony called New Amsterdam.

In 1789, Congress assembled in New York which elected George Washington as President. NYC became the Federal Capital for a year until it was moved to Washington D.C.

So, even in the year 2021, there are wonderful Historical Sites in NYC worth visiting! 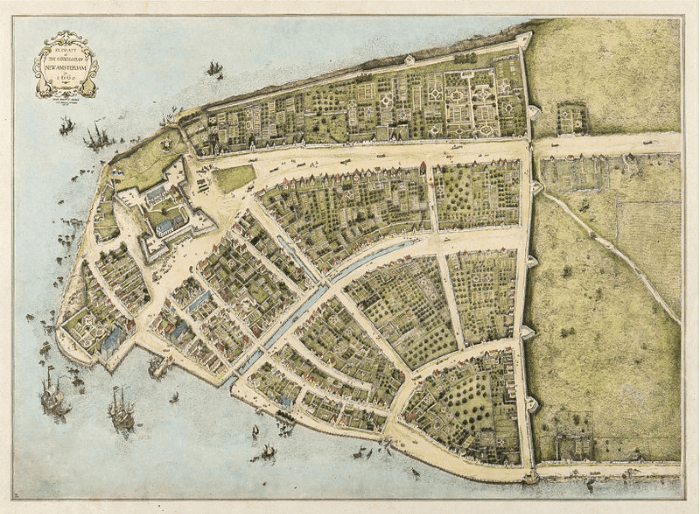 While very few sites remain in Manhattan, there are a few, and each is worth visiting!

Built by the De Lancey family in 1719, 54 Pearl Street, in the modern-day Financial District, has been a private residence, hotel, and one of the most important taverns of the Revolutionary War, and is the oldest standing structure in Manhattan.

Taverns were centers of community in the 18th century. Fraunces Tavern was a place where travelers and locals would exchange the latest news and ideas. The New York Chamber of Commerce was founded at the Tavern in 1768. 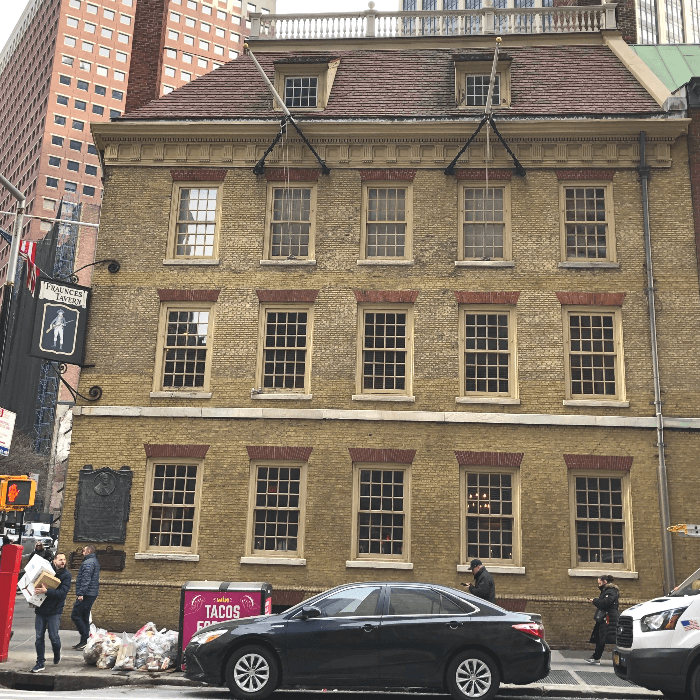 In May 1775, Fraunces opened his doors to the New York Provincial Congress, which was founded in the Long Room. The Provincial Congress acted as a temporary government for the colony throughout the Revolution. They were initially formed as a convention to choose delegates to participate in the Second Continental Congress.

On November 25, 1783, British troops left New York City – the last American city to be occupied. This day would later be referred to as Evacuation Day. George Washington led his Continental Army in a parade from Bull’s Head Tavern in the Bowery to Cape’s Tavern on Broadway and Wall Street. New York Governor George Clinton’s Evacuation Day celebration was held at Fraunces Tavern. During the week of Evacuation Day, George Washington was in the City, and he made use of the Tavern by dining in and ordering take-out. 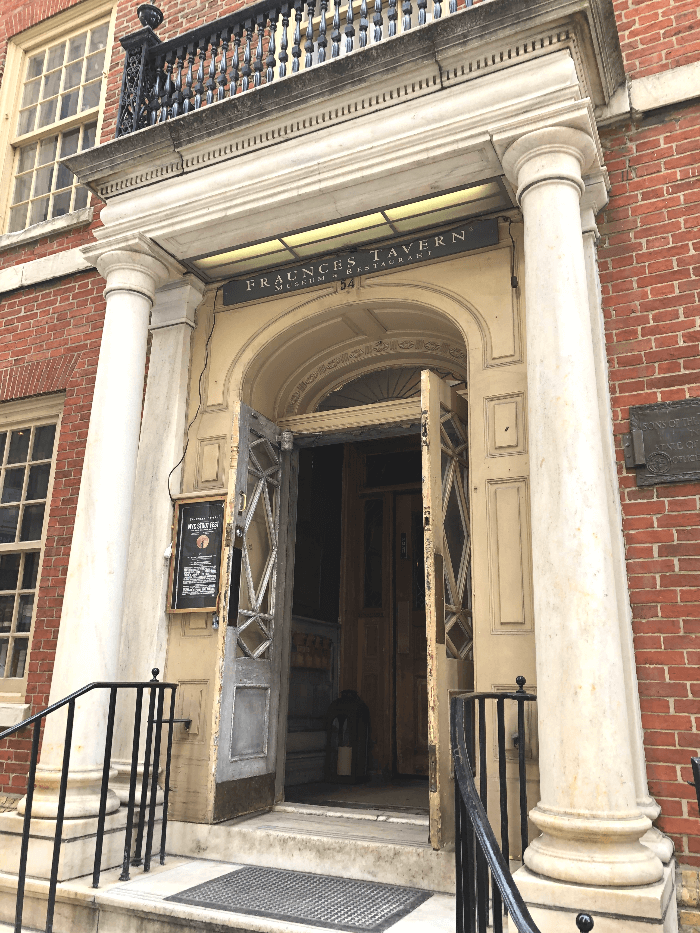 Entrance to the Fraunces Tavern

On December 4, 1783, nine days after the last British soldiers left American soil, George Washington invited the officers of the Continental Army to join him in the Long Room of Fraunces Tavern to bid them farewell.

The first floor of Fraunces Tavern remains a tavern and restaurant, and the second floor is a museum full of Revolutionary War relics including a lock of George Washington’s hair and a piece of his coffin!

You can tour the tavern, and even book a reservation for lunch or dinner!

The Tavern is close to Battery Park, so visit before or after taking a tour of the Statue of Liberty!  Or, if you are exploring the Wall Street Area, the Tavern is very close by! 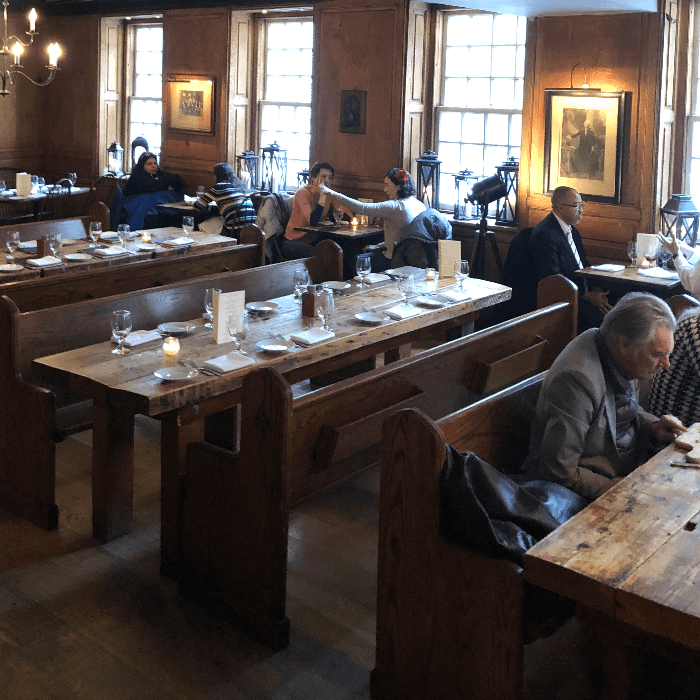 Entrance to the Fraunces Tavern

Originally established in 1733 as a park for lawn bowling, thus the name, Bowling Green Park hosted one of the most famous demonstrations of American rebellion against England: the destruction of the statue of King George III.  Bowling Green’s cast-iron fence reflects evidence of that day.

The fence was installed in 1771 to protect a giant statue of King George III that was erected in the park six years earlier by the British government.  The fence posts, decorated with royal crown-shaped finials or iron balls, were sawed off on July 9th in an act of defiance by the Sons of Liberty and melted down for ammunition.  The statue of King George was torn down as well.

The park is right around the corner from the Fraunces Tavern. 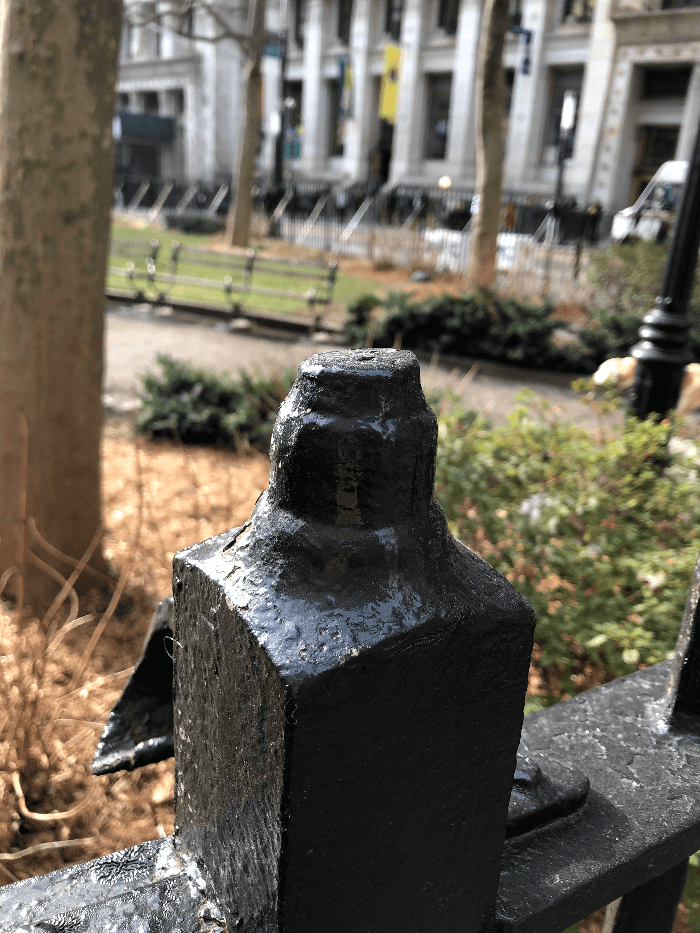 Don’t want to “throw away your shot”?  Then head to these sites:

Gracie Mansion was originally built in 1799 by merchant Archibald Gracie, and was  acquired by the city of New York in 1896. For nearly 50 years under the ownership of New York City, Gracie Mansion was used for a variety of odd functions including a concession stand, restrooms for the park, and classes for immigrants. Then, in 1923 it became the first home to the Museum of the City of New York. It served as the museum’s space until January 11, 1932 when the institution relocated to its Fifth Avenue building. After that, the NYC Department of Parks converted it into a historic house museum.  Then in 1942, Gracie Mansion assumed its current role as home to the mayor of New York with Mayor La Guardia as its first mayoral resident.

Gracie Manison is connected to Hamilton’s demise. After his infamous duel with Aaron Burr, Hamilton was brought to the Bayard House on Jane Street in the West Village. It was in that house in front of the fireplace the fatally injured Hamilton spent his last moments before dying the next day on July 12th. The fireplace was installed in Gracie Mansion’s ballroom in 1966.

Gracie Mansion is located in the Upper East Side of Manhattan, in Yorkville on 88th Street. 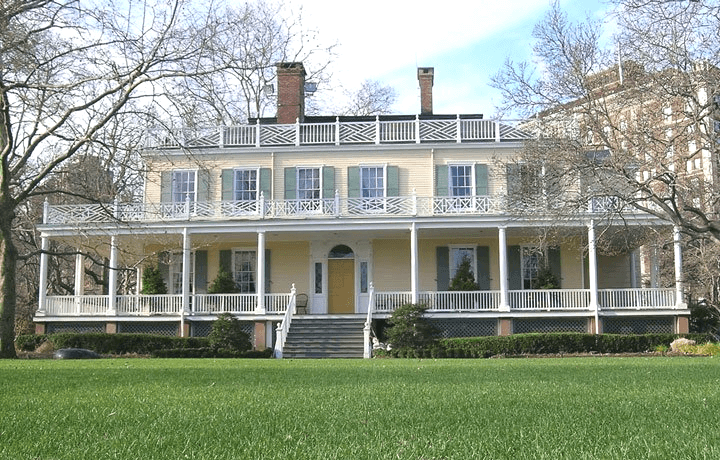 The Grange House is believed to be the only home ever owned by Alexander Hamilton can be found in the historic Hamilton Heights section of Harlem inside St. Nicholas Park. The home has been moved twice in its lifetime, once in 1889 and again in 2008. It now sits on land once owned by Hamilton.

The Grange was designed by architect John McComb, Jr., an architect who also designed other famous New York City buildings such as Gracie Mansion, mentioned above. 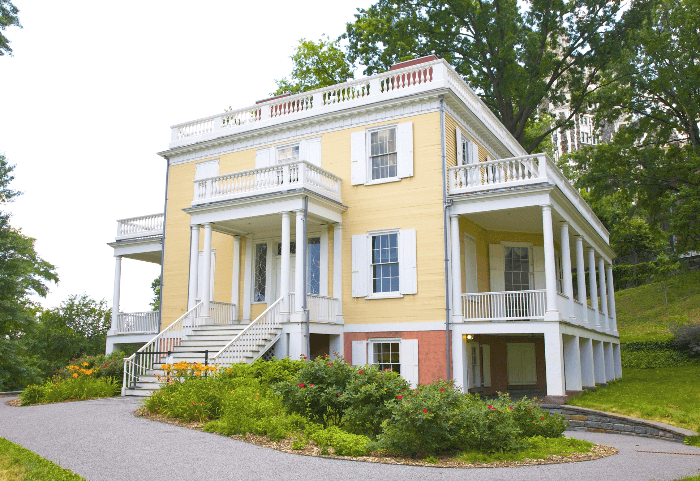 Upon his death, Hamilton was buried in Trinity Church‘s cemetery. When his wife, Elizabeth Schuyler Hamilton died on November 9th, 1854, she too was buried in the same cemetery. The Hamilton’s were also members of the church when they were alive. Their children were baptized there and they held a family pew.

Trinity Church is a short walk from the 9/11 Memorial. 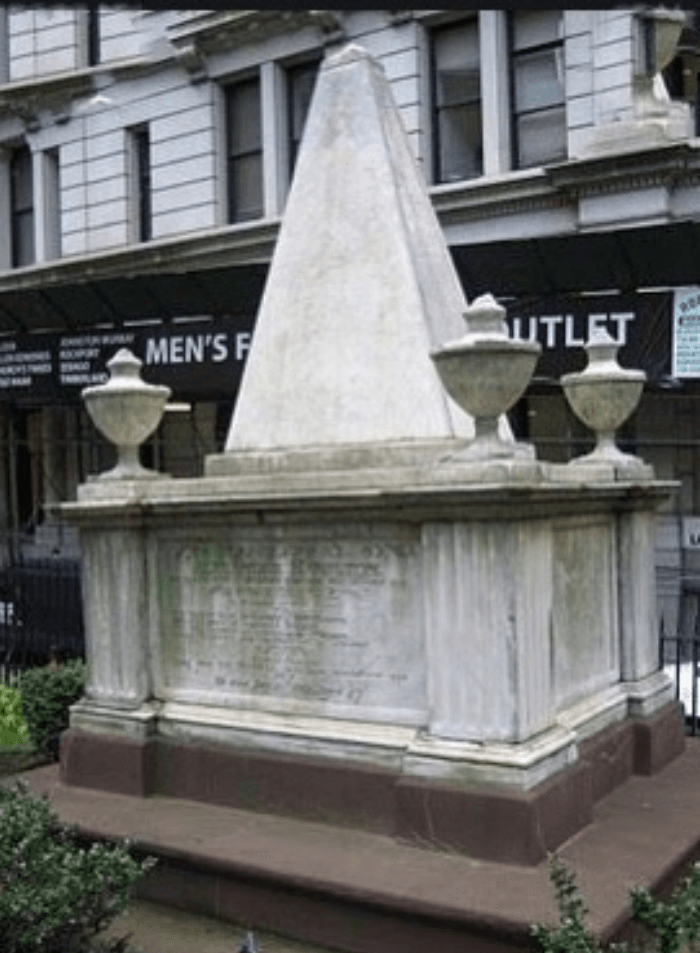 Any other wonderful Early American History Sites in NYC?  Let me know in the comments, and I’ll make sure I visit on my next trip to Manhattan!