This profile has been a LONG time in coming!  Since the day I met Steven Powers artist, dealer, collector, friend, I knew I wanted to profile him!  But, for the first few years of our friendship, I only saw him at art and antique shows where there was little time to really deeply visit.  But finally, just recently, I spent the day in Brooklyn with Steve and my husband Will, and our dear friend Joshua Lowenfels, whom I profiled in this post, and we enjoyed a wonderful day exploring Brooklyn together, and spending time in his fantastic studio. 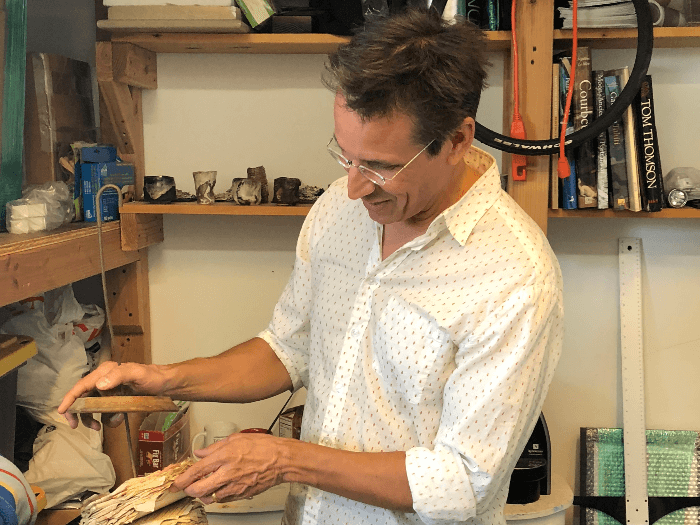 Steve is originally from Portland, Maine, and knew at a young age he wanted to pursue art.  He attended the prestigious Hartford Art School.  His post-college years took him to New Jersey where he worked in a gallery and also spent time painting in a garage-turned-studio, provided by an employer.

In the mid 1990’s Steve managed another art gallery, and also became a studio manager for a designer, focusing on branding and packaging for a high-end jewelry line, all the while, continuing to work on his painting. 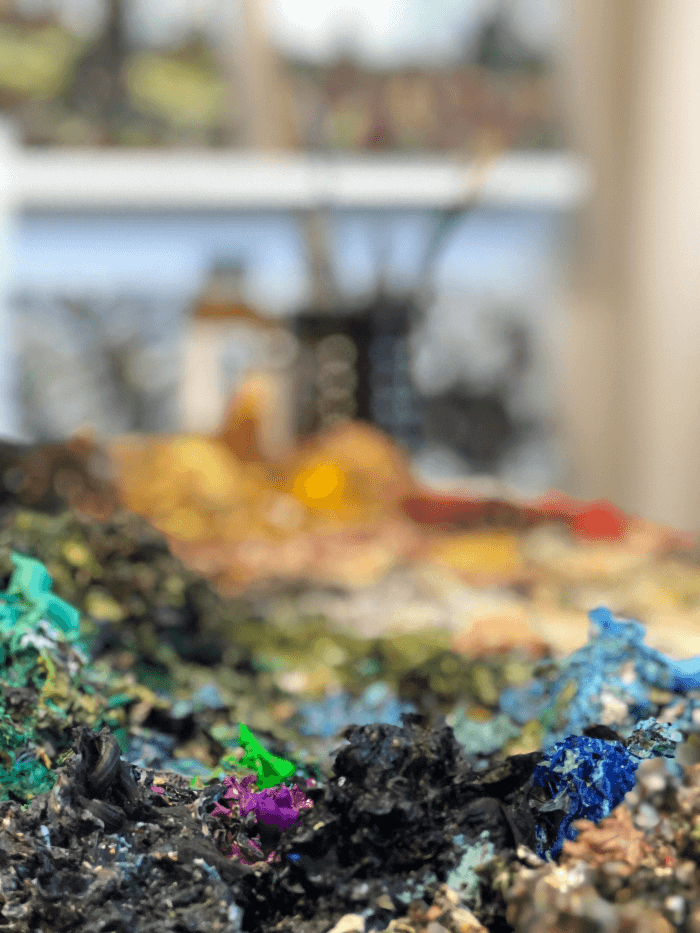 Cast-off bits of paint from Steven Powers’ works create a three-dimensional work of art on their own….

At the same time, Steve was busy collecting.  When he was younger, he collected coins and MAD magazines, accompanying his parents to garage sales on the weekends.  For years, Steve was an avid collector of Burl Treen, domestic objects made from wood.  You can read more on this subject in this 2005 article published in “Antiques and the Arts Weekly.”

But, let me just say this…Steven Powers is an expert on the subject, and has authored the only book on the subject, North American Burn Treen:  Colonial and Native American, which you can purchase by clicking here.  Over time, his interests broadened, and became more varied and refined, and he is now known for American Folk Art and Outsider Art. 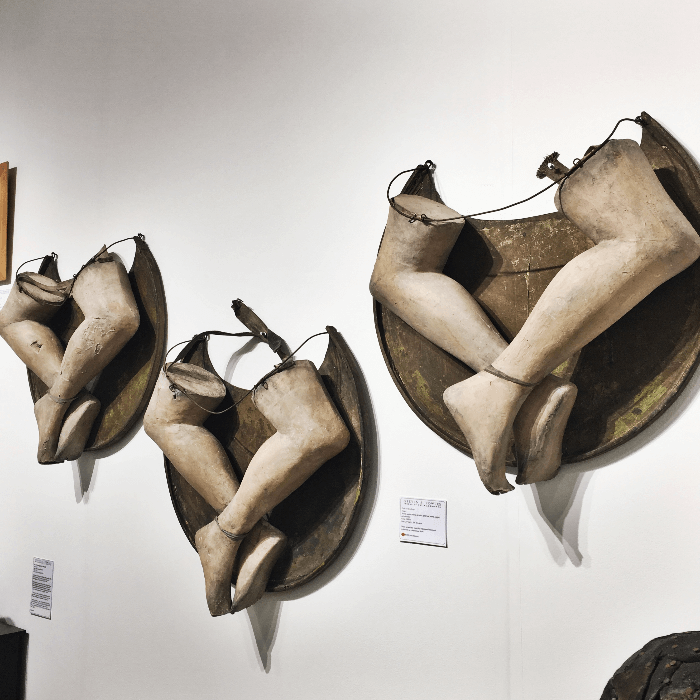 An example of the eclectic, unusual, and fantastic treasures Powers makes available as a dealer…

In 1998, Steve decided to jump into the art and antiques industry, and began collecting and selling as a full-time career.  I found his perspective on his personal collecting fascinating.  Steve does not typically personally collect what he sells, because it feels inauthentic to him…as if he is cheating his potential clients by keeping the best finds for himself.  Steve does love the thrill of the acquisition, keeping his find for a period of time while he does further research, and then brings the piece to a show to sell.

Which shows?  Steve is a regular exhibitor at the Outsider Art Fair in NYC, the Antiques in Manchester:  The Collectors Fair in New Hampshire, The Philadelphia Antiques & Art Show, and the Antiques Dealers’ Association Show, and by the way….Steve is the President of the ADA.  And, since this IS a travel blog….I highly recommend attending EACH of these shows…I have attended 2 of 3, and each one is unique, and wonderful in its own way! 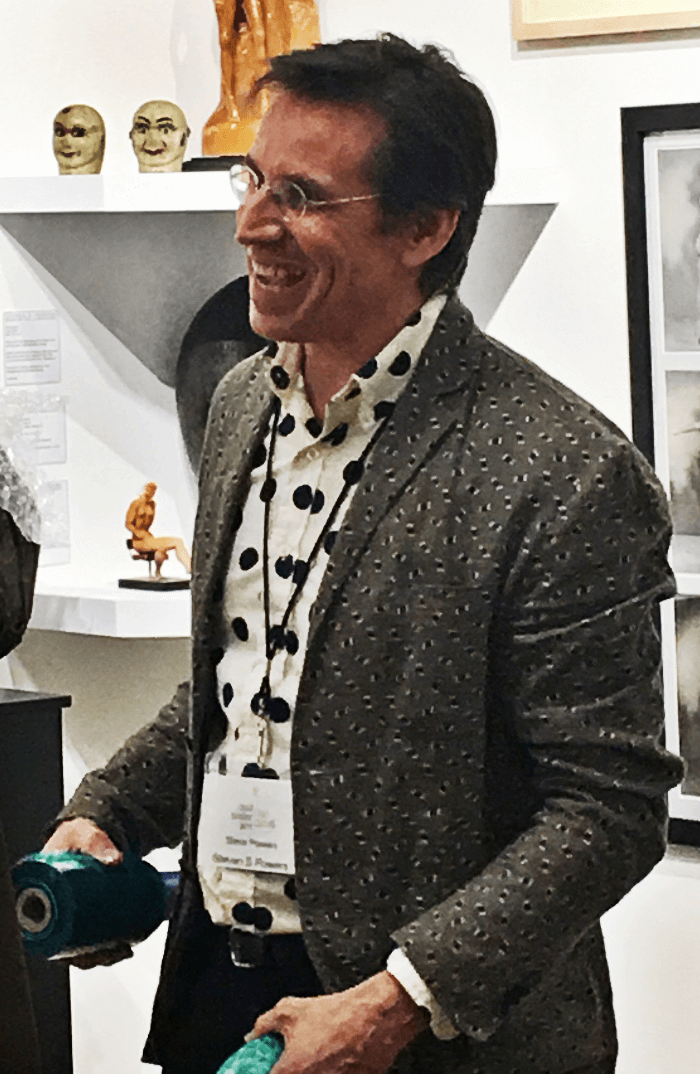 In addition to dealing in art and antiques, Steve is also an accomplished contemporary painter, represented by Fred Giamipetro Gallery.  I’m a HUGE fan of Steve’s paintings, and love his perspective about creating his own art.  A successful painting, for Steve, is a successfully solved problem, whereby the paint and the surface are interactive with the artist as well as the person looking at the painting, requiring good composition whether from two inches, six feet, or across a room.

Steve’s current studio is in a very cool Industrial building in Brooklyn, where he and many other artists lease space to do their creative thing.  His studio is filled with everything from his recent paintings, to curiosities and unique finds he is holding for an upcoming show, to his personal collection of Japanese Saki cups, known as “guinomi”, from which he enjoys an occasional espresso. 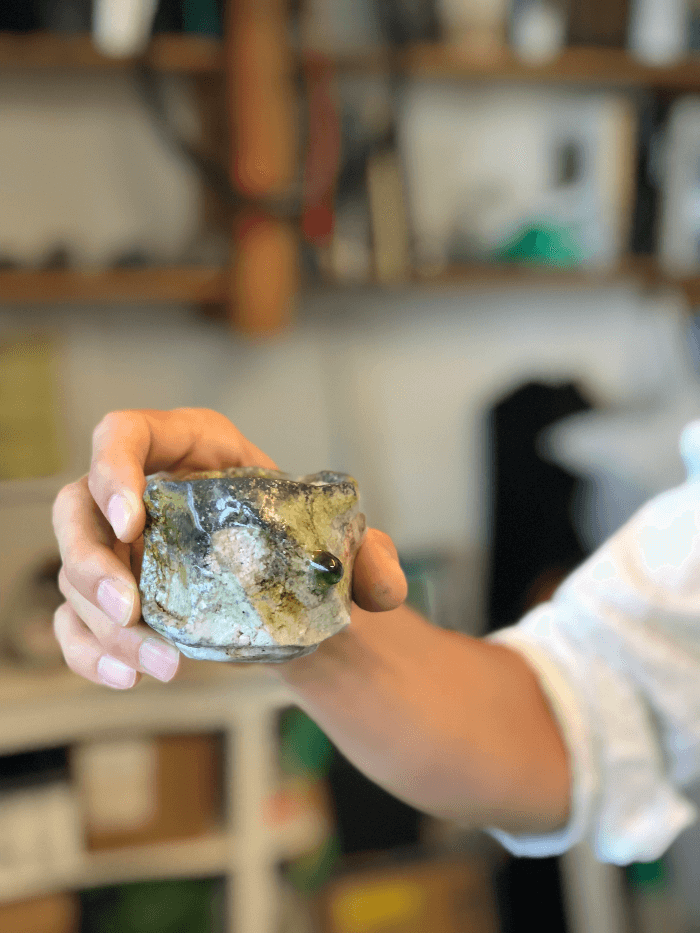 One in a collection of Japanese saki cups in Powers’ studio…

Steve now has his own NYC Art Gallery Space!  Featuring simply amazing Outsider Art, Folk Art, Treen, and Americana.  Located at 53-C Stanton Street in Manhattan.  Typically open Thursday-Sunday, but be sure and check his Instagram account for current hours.  100% worth your time to make a visit!!

I encourage y’all to check out his web site and also follow him on Instagram @stevenspowers.  Plan a trip to one of the shows I mentioned above…Steven Powers is one of the coolest and most talented people I know…and it is my privilege for me and my husband to call him our friend! 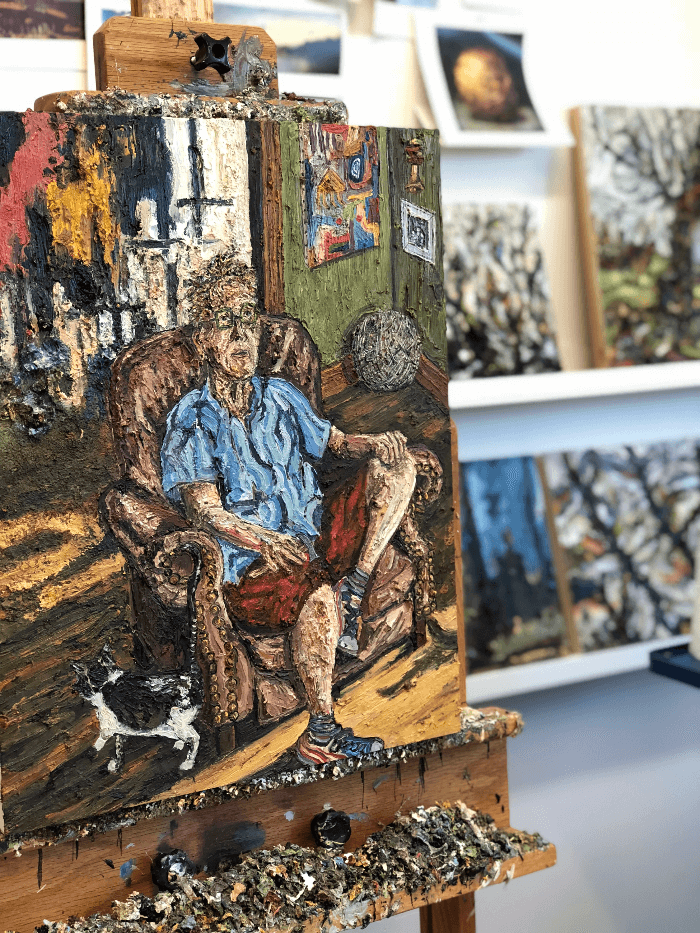 Powers’ paintings in the foreground and background as seen in his Brooklyn studio.