Our Western Heritage and the American Frontier hold a deep fascination for many people.  Americans, and visitors to the United States, often travel in search of glimpses of the Wild West.  Western Heritage in Wyoming is plentiful, and two cities in particular offer visitors unique glimpses into the past.  Let’s take a closer look at Cody, Wyoming and Cheyenne, Wyoming.

On a recent 4000 mile road trip across the United States, Will and I made a point to visit two cities in particular.  Cody, Wyoming, famous for many things, include its ties to Buffalo Bill, and Cheyenne, Wyoming, famous for its rodeo, dating back to the late 1800’s.  At one time, these two cities were the only civilized locations in a vast sea of undiscovered and untamed wilderness.

Cody is a city in Northwest Wyoming, and is named after Colonel William Frederick “Buffalo Bill” Cody for his part in the founding of Cody in 1896.  Cheyenne was founded earlier, in 1867, and was named for the American Indian Cheyenne tribe, one of the most famous and prominent Great Plains tribes, closely allied with the Arapaho. Cheyenne is in the Southeast corner of Wyoming, just a short distance from the Colorado border.

Both cities are completely charming, and for those who want more than a passing glance at The American Frontier, you should visit both!

There are many fun things to do in Cody, Wyoming.  For me and Will, our number one priority was a visit to the Buffalo Bill Center of the West.

In 1895, Buffalo Bill, who’s real name was William Frederick “Buffalo Bill” Cody, was instrumental in the founding of the town of Cody. He first passed through the region in the 1870s. He was so impressed by the development possibilities from irrigation, rich soil, grand scenery, hunting, and proximity to Yellowstone Park that he returned in the mid-1890s to start a town.

The Buffalo Bill Center of the West houses five museums under one roof including Plains Indian culture, western art, Yellowstone, firearms, and of course — the legendary Buffalo Bill.

I learned so much at this museum, and enjoyed seeing artifacts like:

The Western Art collection is amazing and extensive, and the Plains Indian collection is truly breathtaking.  For those interested in firearms, the collection is enormous.  It would be easy to spend an entire day inside The Buffalo Bill Center of the West.

There are several lodging choices in Cody, but I always opt for the historic hotel when I can!  I booked one of the original historic rooms at the Irma Hotel, named for Buffalo Bill’s daughter, Irma, owner of the silver heart charm bracelet mentioned above.

A must-see is the main dining room, which contains The Irma’s famous cherrywood bar, a gift from Queen Victoria, and one of the most photographed features in all of Cody. The original part of the hotel was built for Buffalo Bill in 1902. The northwest addition was constructed in 1929. 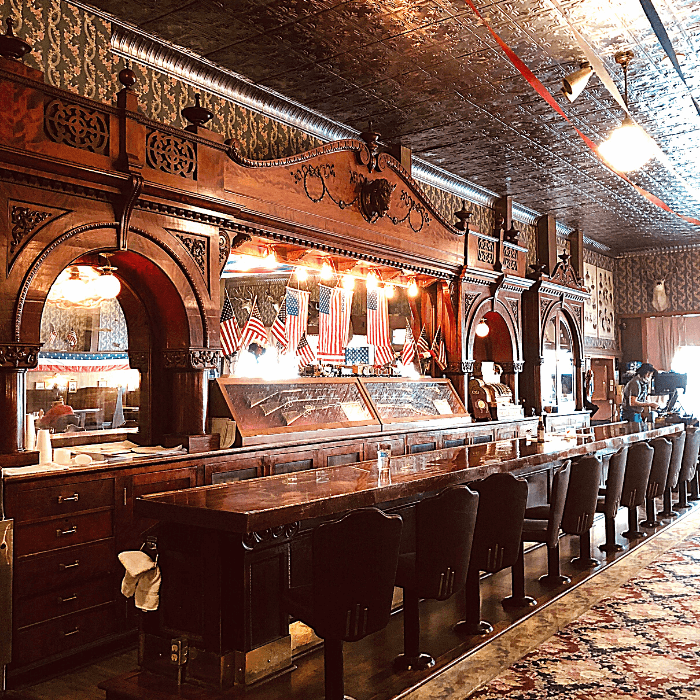 Cody is about an hour east of the eastern entrance to Yellowstone National Park, and about two hours south of Billings, Montana.

There is so much wonderful Western Heritage in Wyoming, and Cheyenne has so much to offer if you are interested in the American Frontier.

Rodeo fans know about the Cheyenne Frontier Days Outdoor Rodeo and Western Celebration.  Held every year since 1897, and according to their website, in 1897, Frederick W. Angier, Traveling Passenger Agent of the Union Pacific Railroad, suggested to the editor of the Cheyenne Daily Sun-Leader, a festival similar to Greeley, Colorado’s “Potato Day.” As a result of that suggestion, plans for the first “Frontier Day”, were formulated in the Tivoli Saloon at the corner of 16th Street and Carey. Events included pony races, bronco busting, and steer roping among others. At the time, these events were seen as a test of a cowboy’s skill. The inaugural event was so successful that the next year it was expanded to two days and a parade was added. The rodeo expanded as the years went on and more affiliated events were added. Its reputation increased as well. And today it is one of the most authentic and largest rodeo events in the world.

Will and I visited the Cheyenne Frontier Days Old West Museum.  I loved seeing all the amazing historic carriages, as well as memorabilia from rodeo stars such as Larry Mahan.

Of particular interest to me was a Veryl Goodnight bronze statue out front of a pioneer woman, her arms crossed over her chest, and her skirt billowing in the wind behind her.  A tribute to the women who ventured into the American Frontier, a poem on a plaque read: 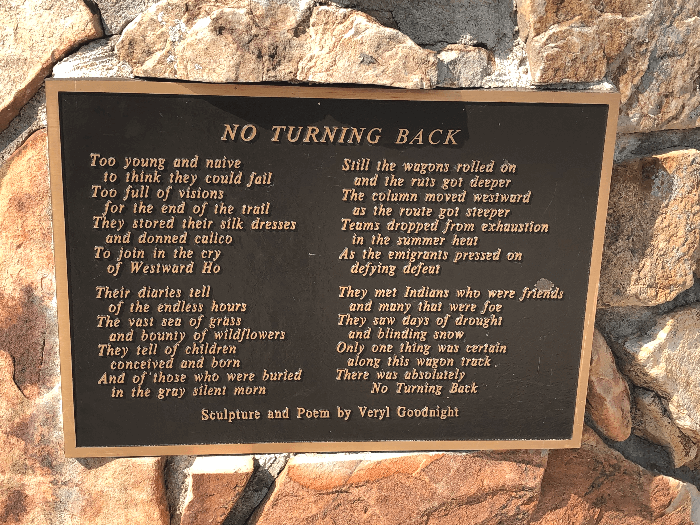 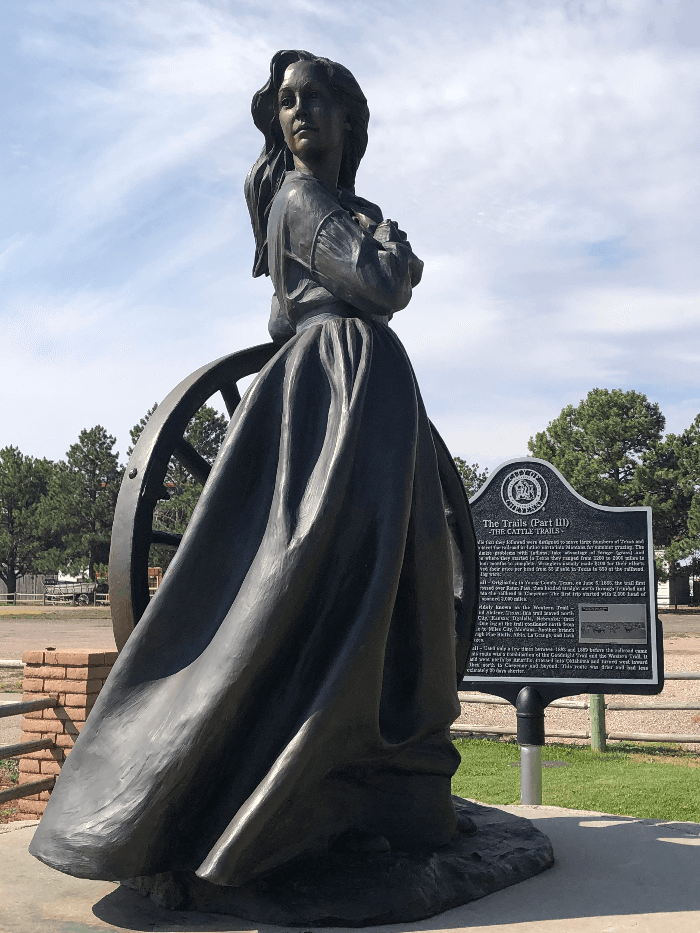 The other wonderful not-to-be-missed museum is The Nelson Museum of the West.  This is a small jewel-box museum in the heart of old downtown Cheyenne, showcasing Mr. Nelson’s personal collection.  And his collected is amazing!  From spurs to saddles.  Boots to firearms.  Indian artifacts, military uniforms, and countless other treasures. 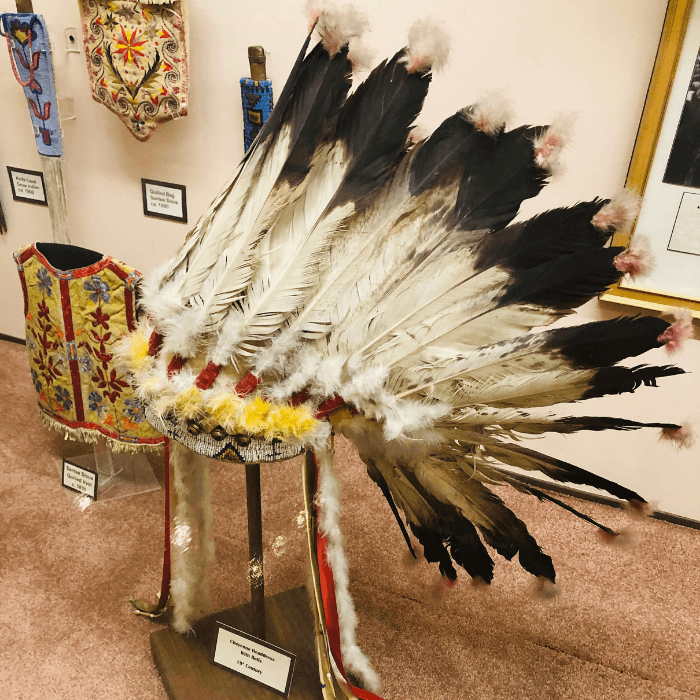 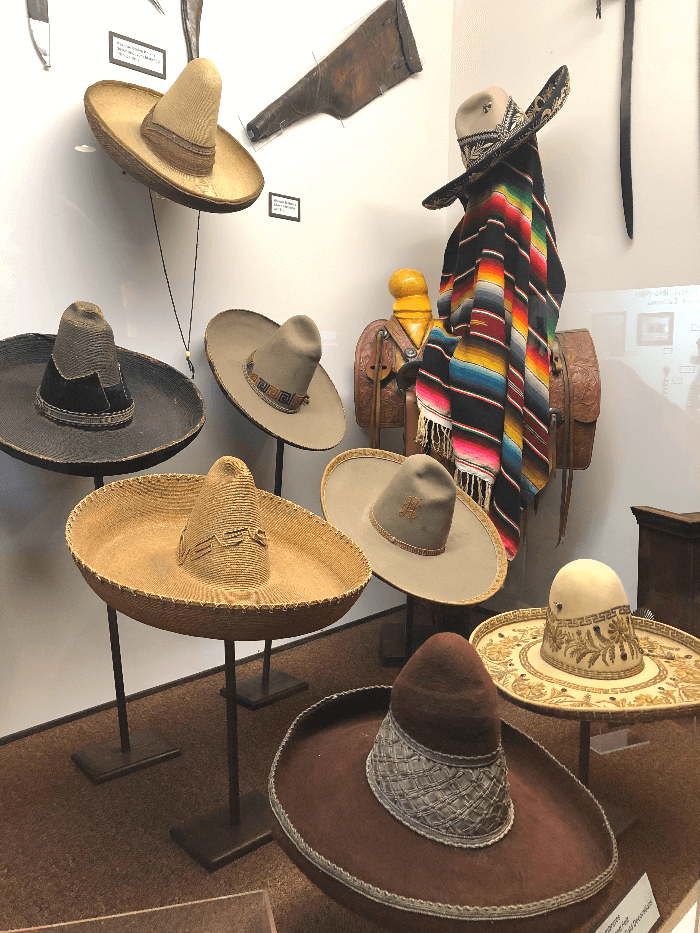 If you feel a hunger pang in Cheyenne, for breakfast or lunch, I highly recommend the Luxury Diner.  Legend has it, the Luxury Dining Car was an operating trolley car on the streets of Cheyenne from 1894 to 1912. It has been operating as a working diner at this location since 1926 and has been the Luxury Diner since 1964.  The cinnamon buns are as big as your head, y’all!

And, for more Cowboy Culture inspiration, check out this post!