Movies that Got Rome Right

Hi fellow trip-takers!  You know how you are getting ready to take a trip, and you want to watch some movies that will get you totally in the mood and in the mental zone prior to arrival?  Today, I’m bringing y’all my favorite Movies that Got Rome Right!

Movies that Got Rome Right:  Gladiator

There are certainly many historical inaccuracies, but no one should watch Gladiator as if it were a documentary.  It is an entertaining and interesting take on the life of slaves who were brought to Rome to entertain the Romans in the Colosseum.  It is true that some Gladiators achieved the status of Rock Star…like Russel Crow’s character General Maximus.  It’s also interesting to compare and contrast the battles between gladiators and wild animals represented in film, and then represented in ancient Roman mosaics seen the Galleria Borghese, an amazing museum I discussed in this post.

Movies that Got Rome Right:  Angels and Demons 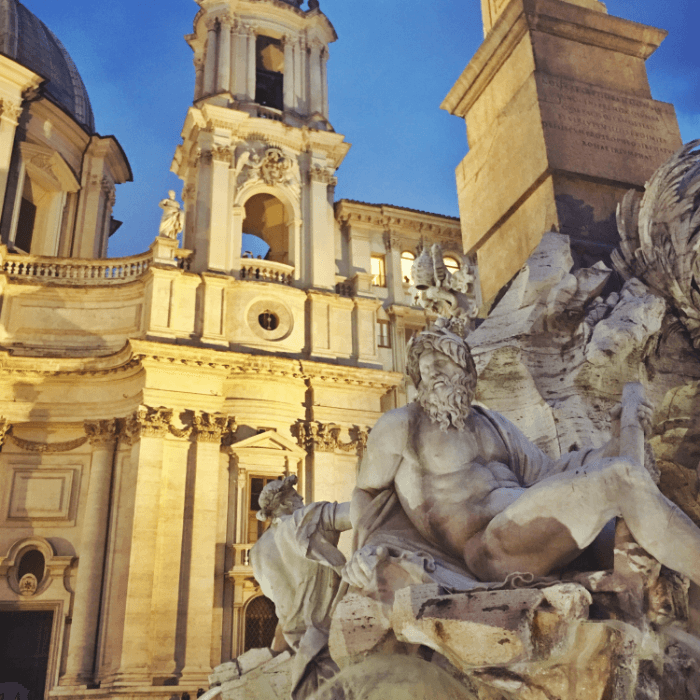 Fountain of the Four Rivers

Much of the filming took place in Rome, and it’s fun to see some of the major churches, fountains and monuments in Rome.  For example, the church Santa Maria della Vittoria, the Fountain of the Four Rivers are represented in this film, both of which I wrote about in this post.  However, Roman Catholic Church officials found The Da Vinci Code offensive and forbade filming in their churches, so these scenes were shot at Sony.  Less groovy….but I get it.

Italian for “the sweet life” or “the good life”, La Dolce Vita is a 1960 Italian drama film directed and co-written by Federico Fellini. The film follows a journalist writing for gossip magazines, over seven days and nights on his journey through the “sweet life” of Rome in a fruitless search for love and happiness. La Dolce Vita won the Palme d’Or (Golden Palm) at the 1960 Cannes Film Festival and the Oscar for Best Costumes.  Not gonna lie…it’s a little hard to follow, but it’s a Classic.  Most of the film was shot at the Cinecittà Studios in Rome. Set designer Piero Gherardi created over eighty locations, including the Via Veneto, the dome of Saint Peter’s with the staircase leading up to it, and various nightclubs. However, other sequences were shot on location such as the party at the aristocrats’ castle filmed in the real Bassano di Sutri palace north of Rome. 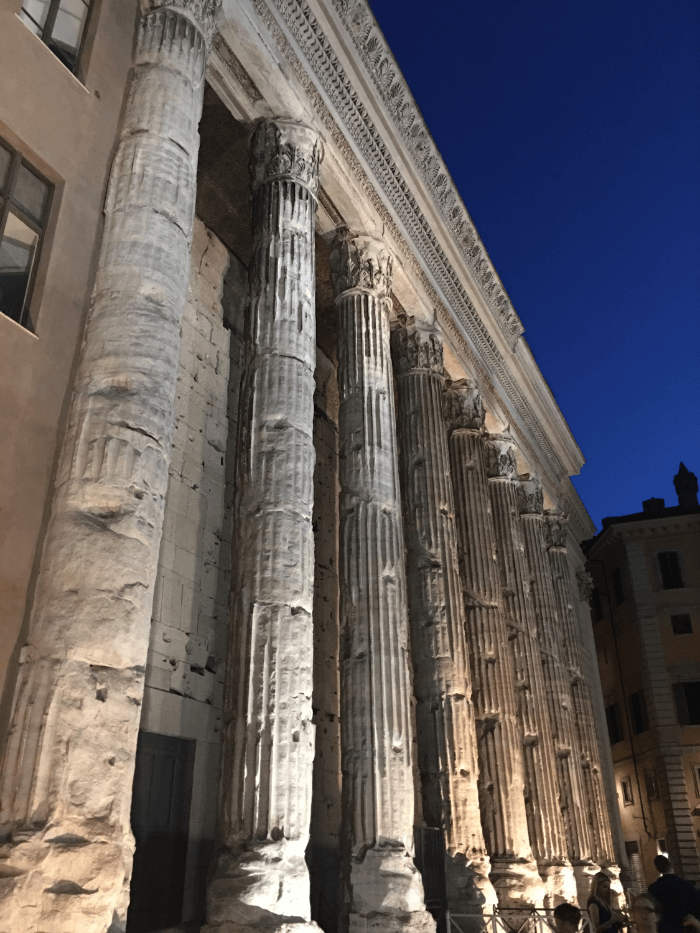 Roma, also known as Fellini’s Roma, is a 1972 semi-autobiographical, poetic comedy-drama film depicting director Federico Fellini’s move from his native Rimini to Rome as a youth. It is a homage to the city, shown in a series of loosely connected episodes set during both Rome’s past and present. According to TCM.com, “The film’s production was predictably extravagant with Fellini re-creating aspects of Rome on the Cinecitta lot, including a 400 yard replica of the newly built Raccordo Anulare expressway that forms a circle around Rome. Other elaborate set pieces include past and present comparisons of bordello life, a counterculture clash between the police and youths at a street fair in Trastevere, the discovery of a first century A.D. Roman apartment with pristine frescos that are destroyed by exposure to the air, an ecclesiastical fashion show in which priests roller-skate around the stage, nuns model large, billowing habits, and a huge plastic Pope makes an appearance.”  Fix yourself a big ol’ bowl of pasta, and dig into this fun film!

Another Classic, how can you not love anything with Audrey Hepburn?  The movie is a 1953 American romantic comedy film starring Gregory Peck as a reporter and Audrey Hepburn as a royal princess out to see Rome on her own. Hepburn won an Academy Award for Best Actress for her performance; the screenplay and costume design also won.It was shot at the Cinecittà studios and on location around Rome.  This film ACUTALLY included many actual sites in Rome, including the Pantheon, Castel Sant’Angelo, Trevi Fountain, Piazza Venezia, Piazza di Spagna, Colosseum, Tiber river, Via Margutta 51, the location of Joe’s apartment where he hosts Princess Ann, Palazzo Colonna Gallery, shown in the final scenes of the princess’s press appearance, Palazzo Brancaccio, the princess’ ornate Roman bedroom.  I love this film!!!

Movies that Got Rome Right:  The Great Beauty

The film won Best Foreign Language Film at the 86th Academy Awards, as well as the Golden Globe and the BAFTA award in the same category.  The film opens with a quote from Céline‘s Journey to the End of the Night: “To travel is very useful: it makes the imagination work, the rest is just delusion and pain. Our journey is entirely imaginary, which is its strength.” After his sixty-fifth birthday, Jep Gambardella, a journalist with a passion for parties and beautiful women, finds himself lost between the nostalgia of the past and the uncertainty of the future. Jep realizes that he has lived superficially: so begins the search for great beauty, between the declining bourgeoisie and the stereotypes of society.  It’s a beautiful film, with so many locations in Rome, I can’t list them all…but Jep’s apartment view…you gotta watch the film for that alone!

So….what are your favorite films set in Rome….?  And maybe we should all go there together to scout some locations…you know…so we can help advise on the next film scheduled to be shot in Rome!

If you enjoyed this post, and want to make sure you see all The Curious Cowgirl posts, click here to receive each post directly in your Inbox!

If you are planning a trip to Rome, I’d love to help you plan an personalized and curated itinerary!  Email me at marythecuriouscowgirl@gmail.com

You can also purchase a One, Two, or Three Day Rome Guide in my Store!  Jam packed with tips, insights, and organized down to the minute, so that you see as much as possible!  Simply click here!