Fletcher’s Corny Dogs To The Rescue

Y’all.  It’s a sad day in Dallas, Texas.  We just received the news that the GREAT State Fair of Texas has been cancelled for 2020.  Gut punch.  But, as in all situations, there’s a silver lining.  Fletcher’s Corny Dogs To The Rescue!!!

State Fairs are often known for their deep fried, calorie rich foods.  And at the State Fair of Texas, the most iconic food choice is, of course, Fletcher’s Corny Dogs!

I simply adore the State Fair of Texas, and celebrate my friends and family who win Ribbons each year for their needlepoint, jams and jellies, and even chicken eggs. 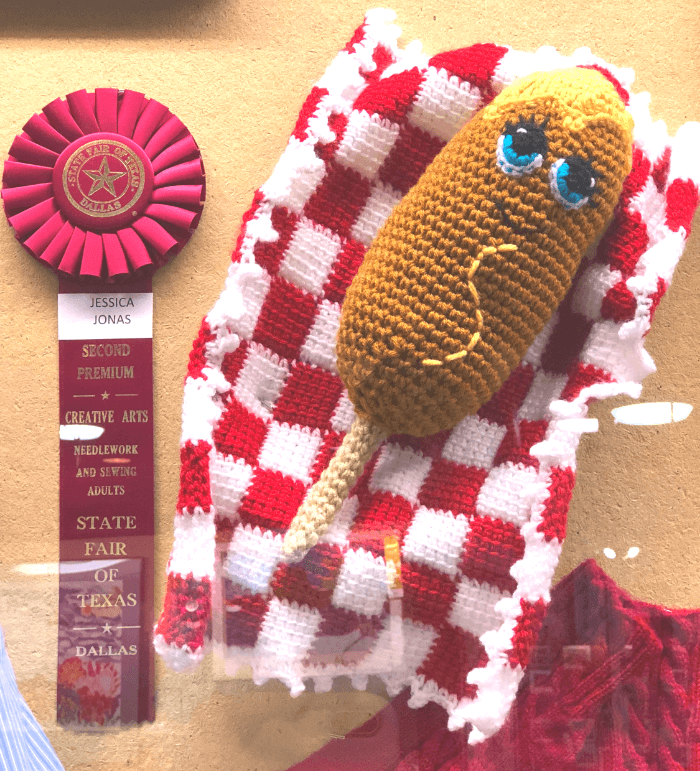 How CUTE is this award-winning Create Arts entry???

I love a good history lesson, as y’all know!  From their website:  “We like to think that you can credit America’s obsession with fried foods, in part, to brothers Neil & Carl Fletcher. Fletcher’s Original Corny Dogs, the famous meal on a stick, was invented in 1938 and debuted at the 1942 State Fair of Texas. The rest is history…

In 1938, brothers Neil and Carl Fletcher were winding down long-term careers in Vaudeville, having spent several of those years performing at the State Fair of Texas in a show called “The Drunkard”. Fortuitously, as the men were plotting their next moves in life, the brother were offered a unique opportunity to run a food booth at Fair Park. Both men had spent years marveling at the lack of cuisine offered to the Park patrons and knew they had an opportunity on their hands.

According to Neil, there was a local baker on Oak Lawn Ave. who served a dish of hot dogs baked in cornmeal in the shape of an ear of corn, and while it tasted good, the process was time-consuming and complicated. The brothers tested the recipe and realized that by frying it, not only did it cut time in the cooking process but now it was a mobile food on a stick.

The Fletchers began selling their corny dogs for 15 cents apiece at the State Fair of Texas in 1942, but the response was decidedly restrained. In fact, the brothers had to cut them in half and give away samples before people were willing to try it. After trying out a series of names ranging from K-9 and Brown Bomber to French Fried Hot Dog and Meal on a Stick, the Fletcher brothers finally came up with a name and began to build a clientele.

It took 12 years before they felt their unique batter was perfected and since then, it’s never changed. The secret to the famous Fletcher’s Corny Dogs isn’t just the batter, it is also in the water temperature and how the batter is mixed. And that’s all we are going to say about that… It’s surreal to look back now and realize that Fletcher’s Original Corny Dogs have been at The State Fair of Texas a decade longer than Big Tex!”

OK, so here’s the silver lining:  Fletcher’s is already offering LOTS of pop up opportunities around the DFW area, as well as Food Trucks!

As of July 8, 2020, here’s a listing of many places to get your Fletcher’s Corny Dog fix.  I am certain more dates and locations will be added, so check their site for more information.  In the mean time…..

Leaving you with this iconic clip from the 1962 Rogers & Hammerstein film “State Fair.”  Sourced from YouTube.