Learn and be Entertained….watch Documentary Films!

In 1897 Mark Twain included an adage comparing truth and fiction in Following the Equator: A Journey Around the World.  “Truth is stranger than fiction, but it is because Fiction is obliged to stick to possibilities; Truth isn’t.”  Said another way…..y’all….you can’t make this stuff up.  Documentary films offer the opportunity to see people, places, and situations that, at times, can seem so unreal..it’s almost like watching a completely fictional story.  Read on…and I will share some of my personal favorite Documentary films with you!

I credit my interest in documentary films to one source:  My darling husband Will who is a voracious consumer of books and films.  Will and I spend many an evening watching a good documentary film.  We complied this list together.  (Those of you who know my husband, will appreciate that he was super frustrated that he could not offer his recommendations divided into specific categories:  art, fashion, military, pop culture, etc. Sigh.  I had to draw the line somewhere!!)

And before I continue….let me dispel an opinion you might hold about Documentary films.  If you are picturing those horrible films, narrated by dull-as-drying-paint disembodied voices, that we were all subjected to in history and science classes in high school…I can assure you, I am talking about a very different experience.  Really good Documentary films have all the qualities of popular pop-culture feature films:  beautiful cinematography, compelling characters, plot twists and battles between good and evil…all the hallmarks of an excellent film.  But, the fundamental difference:  Documentary films are telling a REAL story.  Seems obvious, but worthy of spelling out the difference!

So, what are our top ten favorites?  Grab your popcorn, and read on, friends!

Tomato Republic (2014) “A flamboyant restaurateur, a good ol’ boy and a political ingénue, walk into a 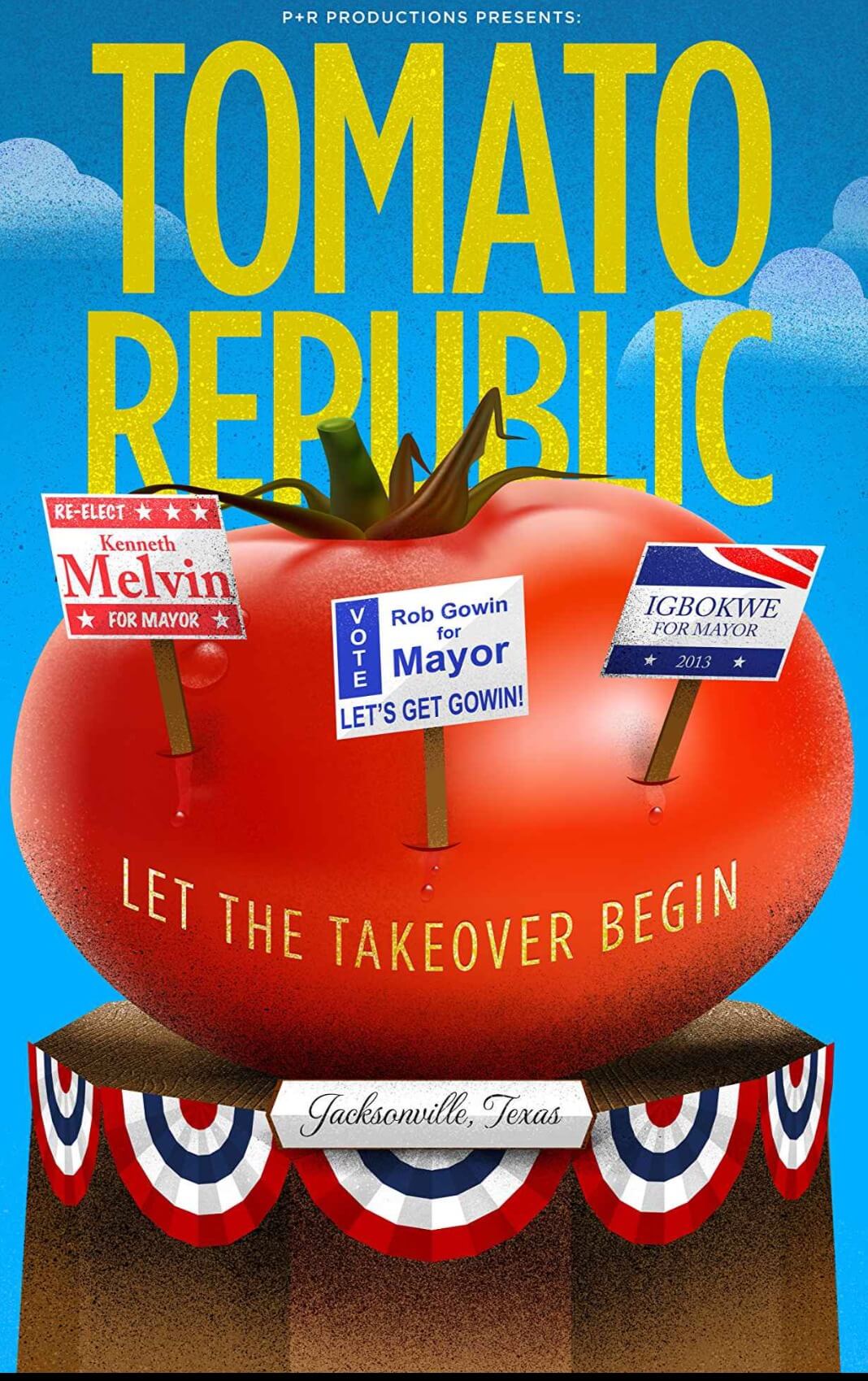 small town political contest and compete head to head to head, for the non-paid mayoral seat of the Tomato Republic. What happens next is anyones guess. The only thing that could slow this race down is a freight train. Let the takeover begin.”  Set in East Texas, and directed by my friends at P+R Productions, this Documentary Film is a gem!  Watch this film, and then take a trip to Jacksonville, TX and stuff your face at Sadler’s and meet Rob Gowin, a subject of the film.  Let that meal digest, maybe check out the Tomato Bowl, then go eat at Ritual and meet Producer/Director Whitney Graham Carter! 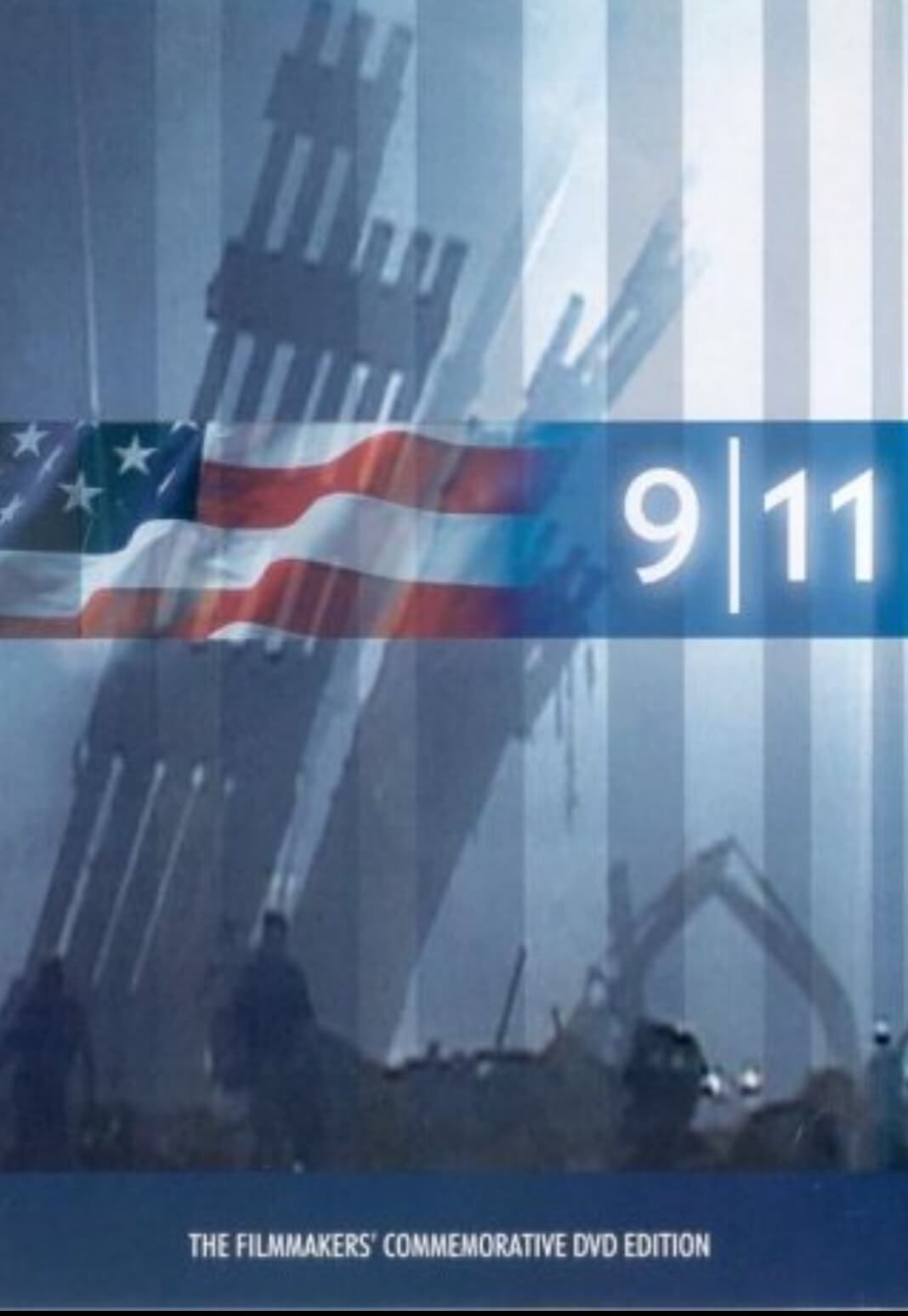 through the lens of James Hanlon and two French filmmakers who were in Manhattan that one day.”  I had the pleasure of meeting Director Jules Naudet at the Stars and Stripes Film Festival in Dallas.  Coupled with the friendships I share with many members of the FDNY, this film is an important reminder of a day we should never forget.  This film will make a visit to the 911 Tribute Museum and the National September 11 Memorial and Museum especially meaningful. 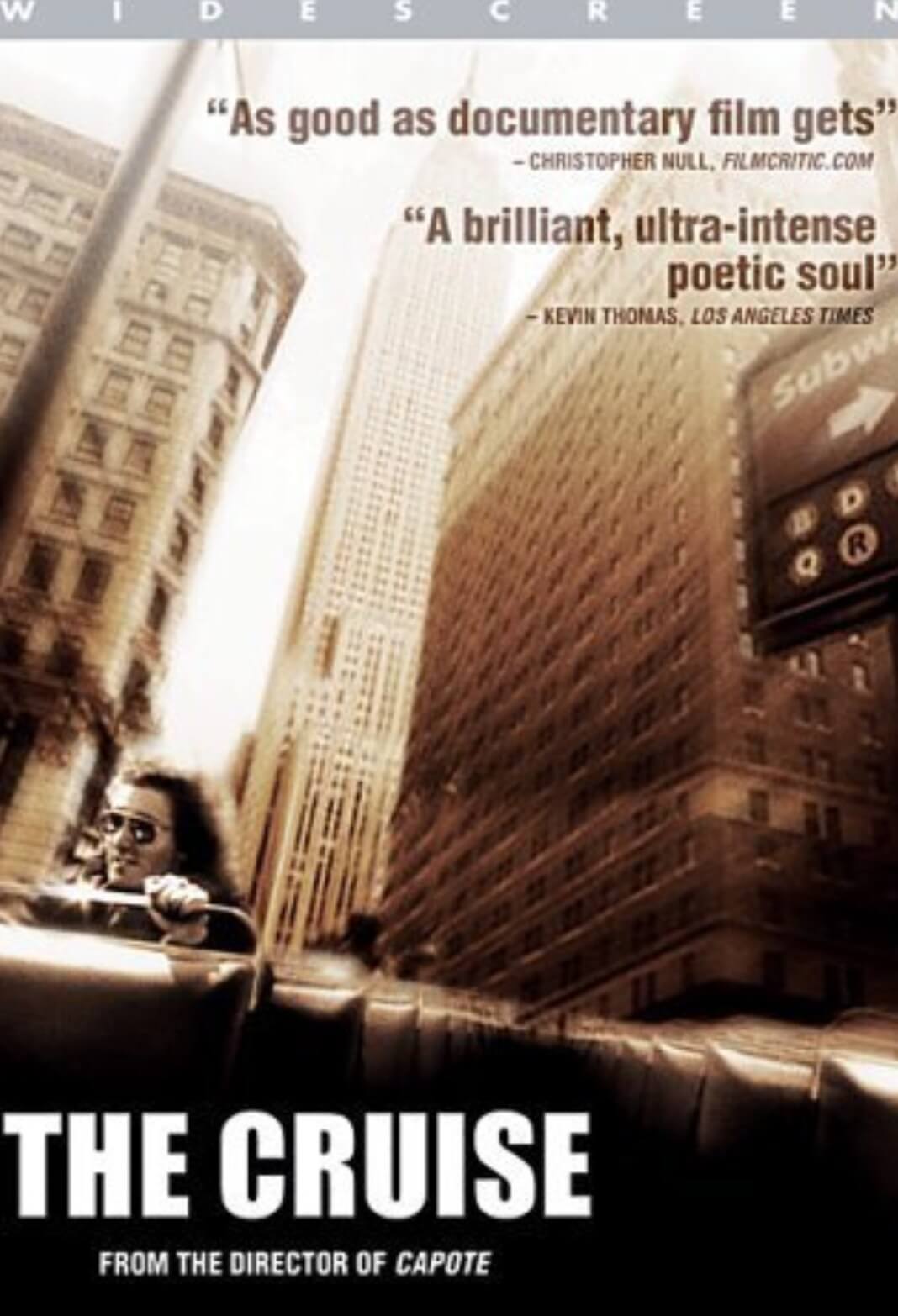 Line double-decker buses. He talks fast, is in love with the city, and dispenses historical facts, architectural analysis, and philosophical musings in equal measures. He’s reflective and funny about cruising: he loves it, got in it to meet women, and he’d quit work if he could.”  Super quirky and lovable subject!

The King of Kong:  A Fistful of Quarters (2007) “Die-hard gamers compete to break world records on 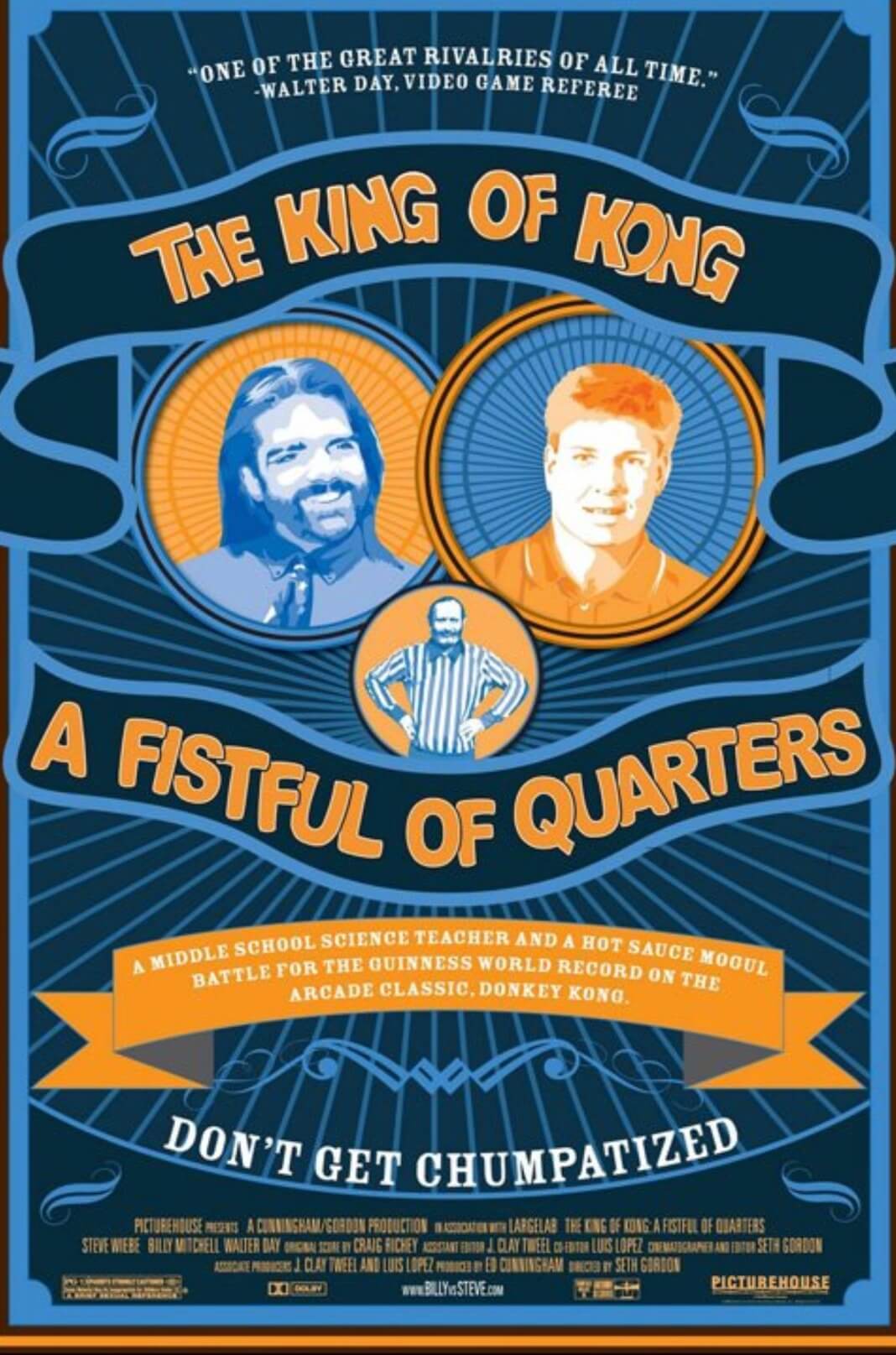 classic arcade games.”  A true tale of good and evil, and hysterical!  If you have ever spent any time inside an arcade, you will get a kick out of this film!

Public Speaking (2010) “A feature-length documentary starring Fran Lebowitz, a writer known for her 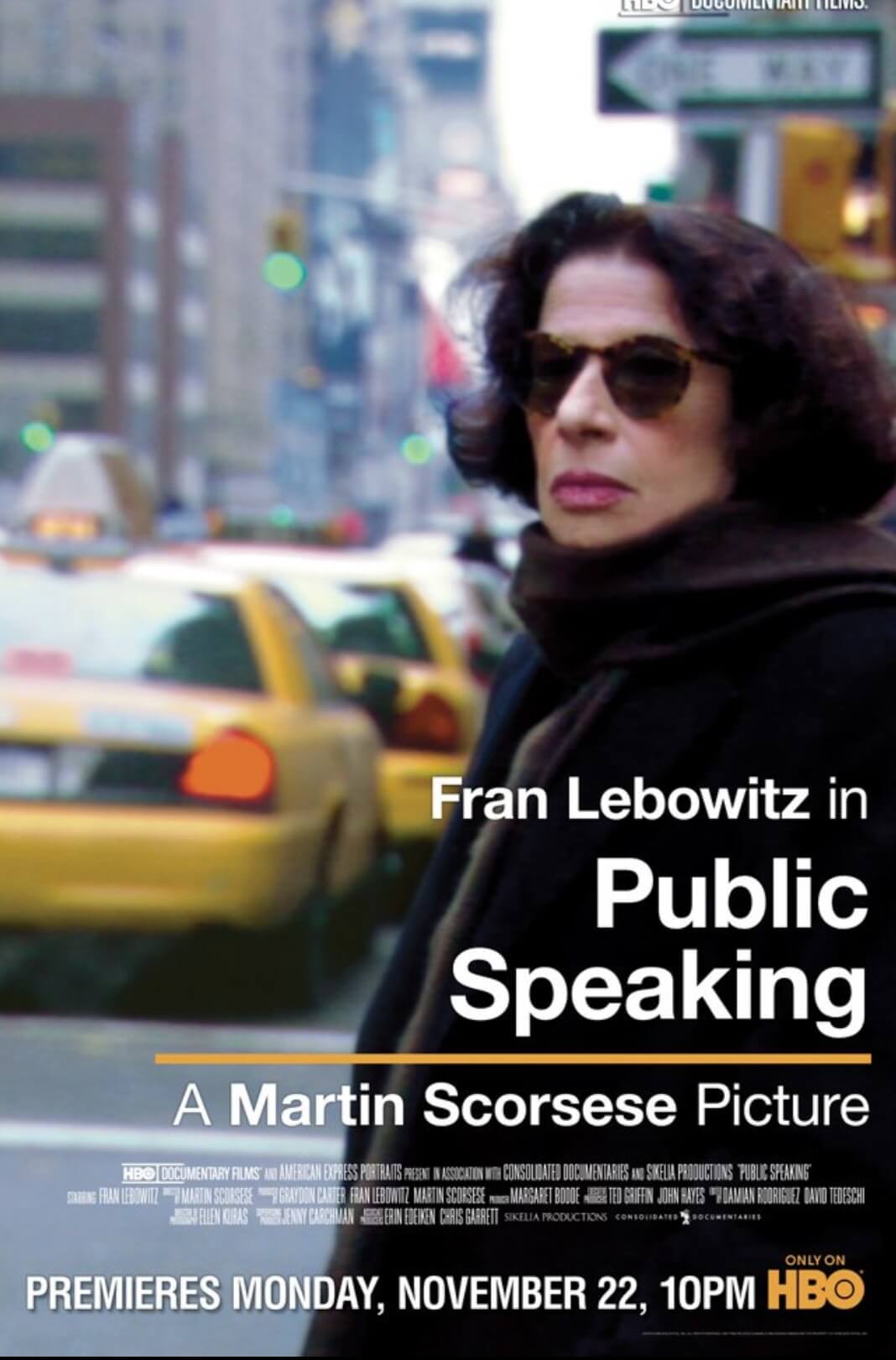 unique take on modern life. The film weaves together extemporaneous monologues with archival footage and the effect is a portrait of Fran’s worldview and experiences.”  Directed by Martin Scorsese, Will and I quote this movie almost every single day.  Fran is hilarious, and if you love NYC, you will particularly appreciate her observations! 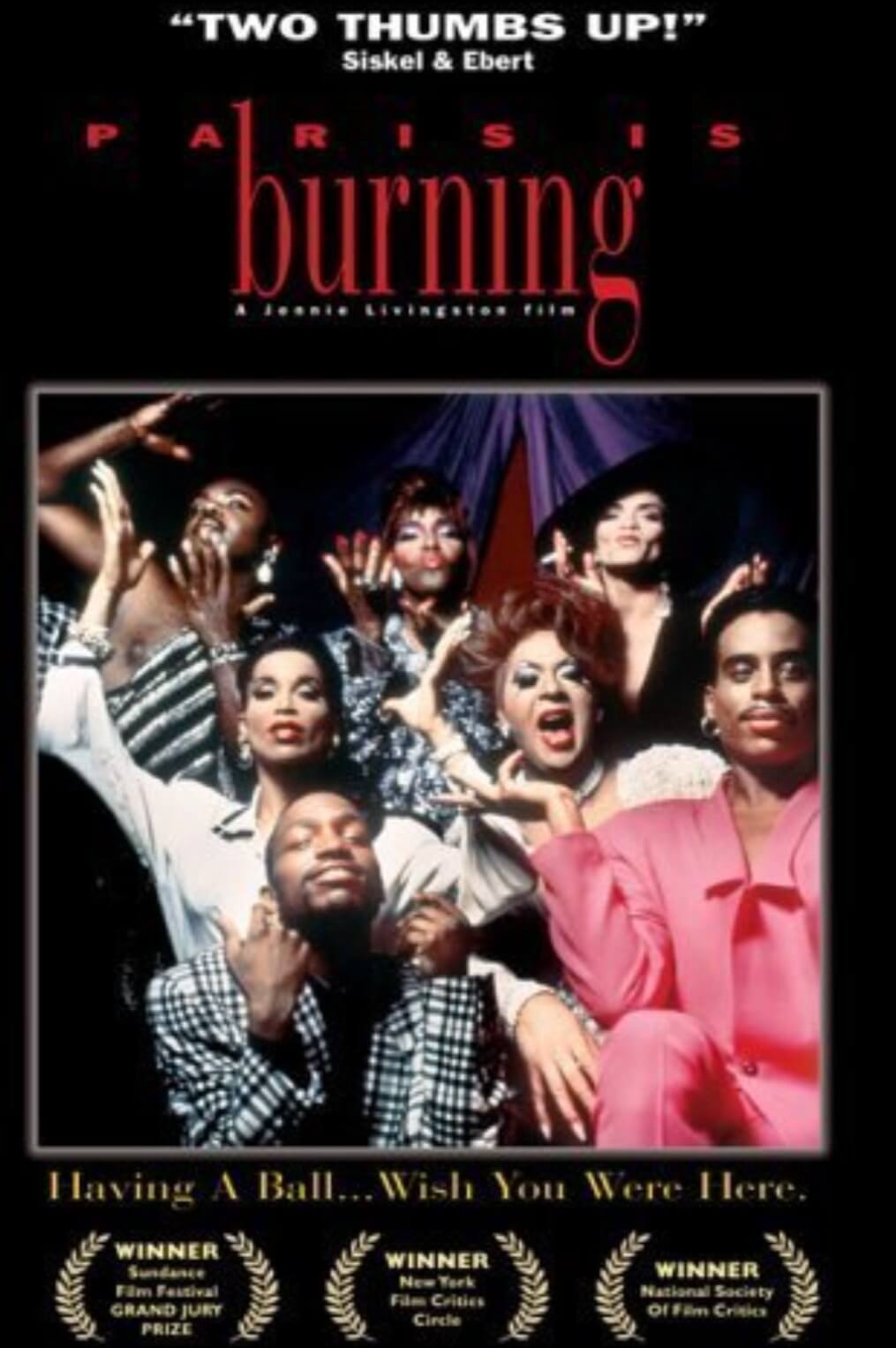 voguing and the ambitions and dreams of those who gave the era its warmth and vitality.”  This film is a mix of fascinating cultural observations, and heart-breaking tales of neglect and abuse.  And, you will finally understand what Madonna was talking about, her her song “Vogue.”  Win! 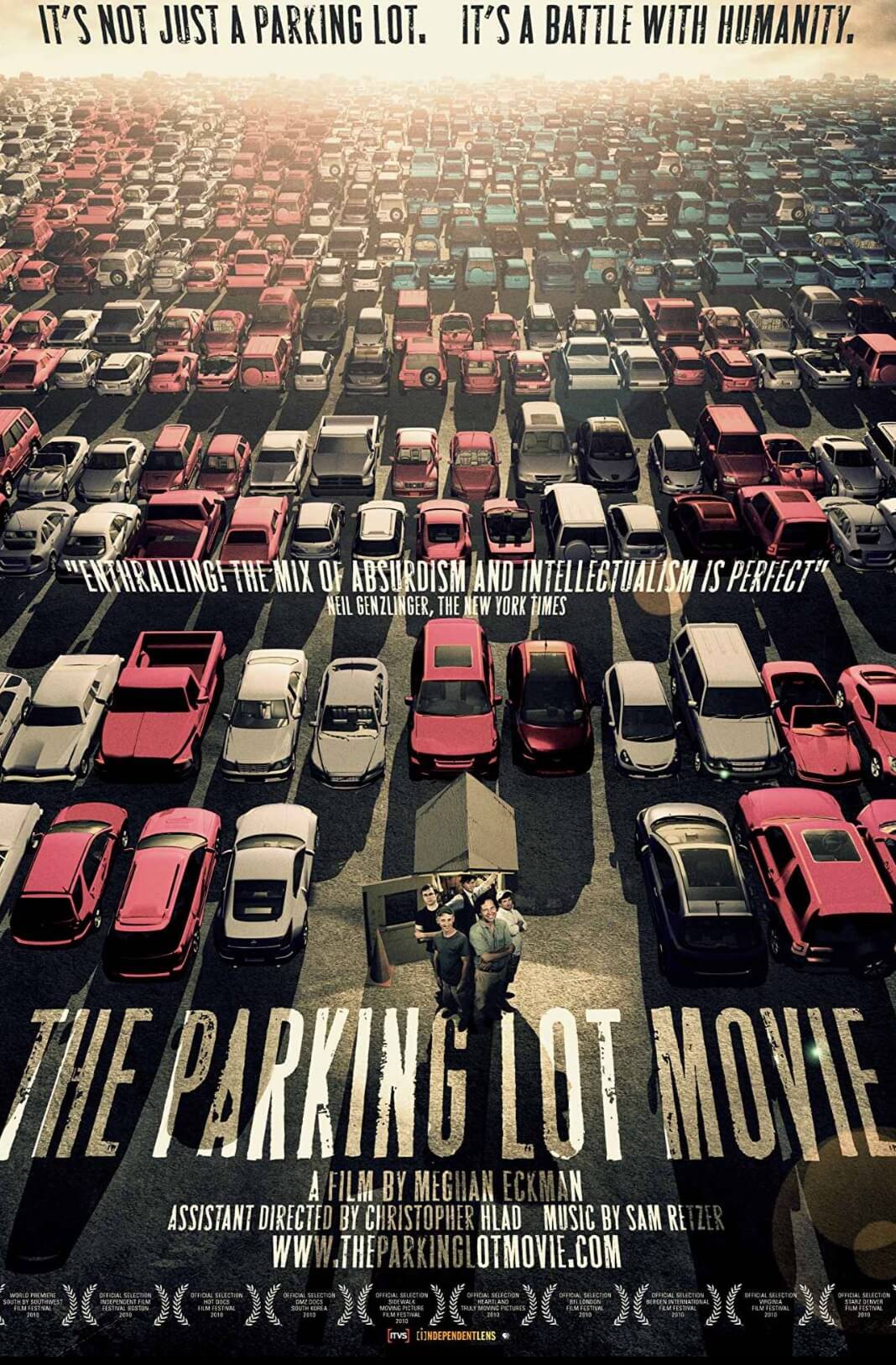 philosophers, surly artists, middle-age slackers and more. This self-described “ragtag group of fractured poets” prefer skateboards and bicycles to cars and have at best a tolerant contempt for the people they serve. They study the art of doing nothing and the knack of getting even with rude, SUV-driving dolts who treat them like inferior beings. As one parking attendant laments, “We had it all in a world that had nothing to offer us.” If the intersection between the status quo and the quest for freedom is their ultimate challenge, could a slab of asphalt be an emotional way station for The American Dream?”  This is one my favorites!  A MUST watch film!

Beautiful Darling (2010) “Edie Sedgwick, Andy’s druggie socialite “muse,” and a real girl, was dead by 1971. Among the “chicks with dicks” who gathered at the second, Union Square version of Andy 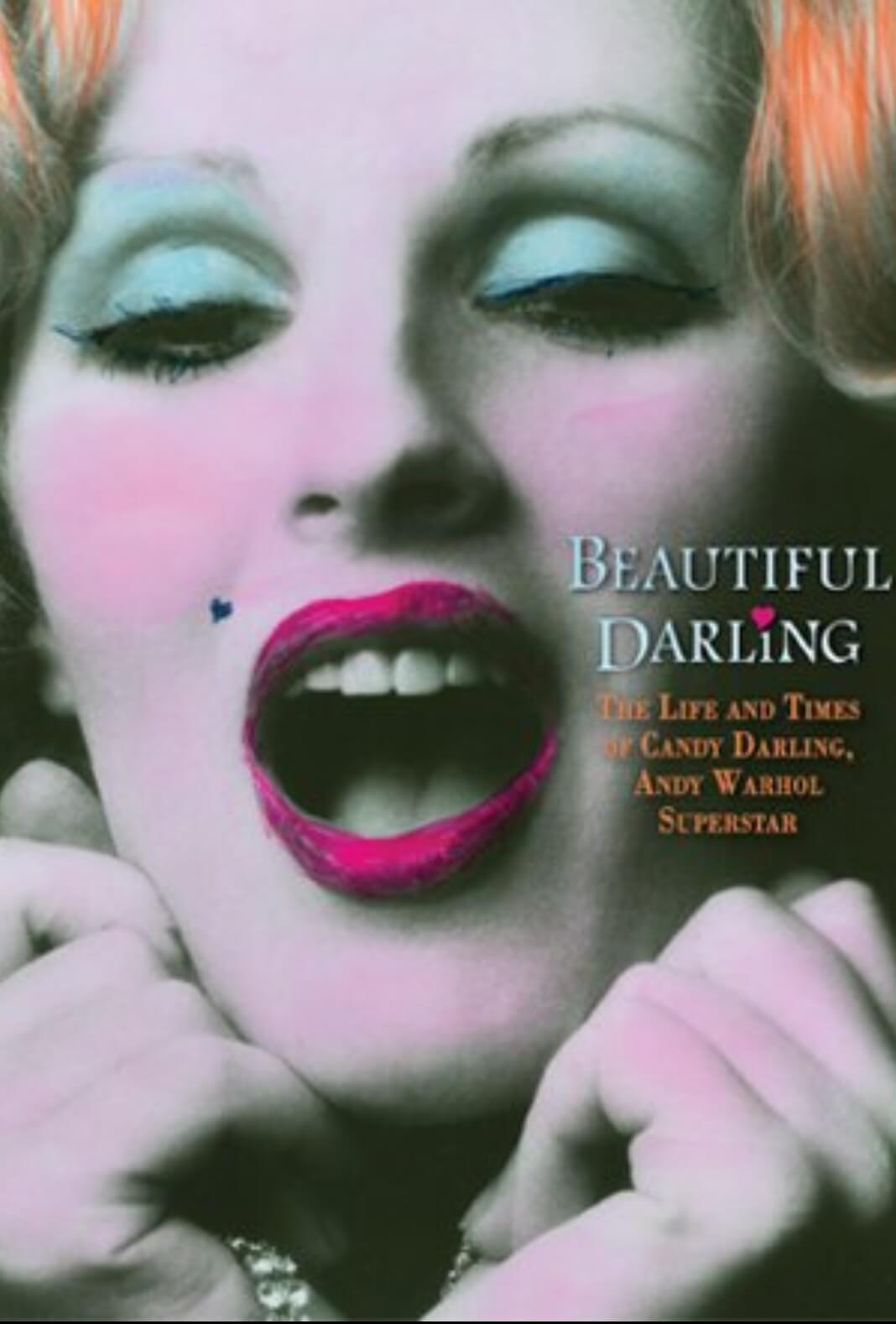 Warhol’s Factory, Candy Darling was the most ethereal and beautiful and pure, it seems from this documentary, which recounts her short life when she had a preferred place in the Factory and the Factory hangout Max’s Kansas City.”  If you are interested in the world of Andy Warhol, this is a great film!

Citizen Jane:  Battle for the City (2016) “Writer and urban activist Jane Jacobs fights to save historic New York City during the ruthless redevelopment era of urban planner Robert Moses in the 1960s.” 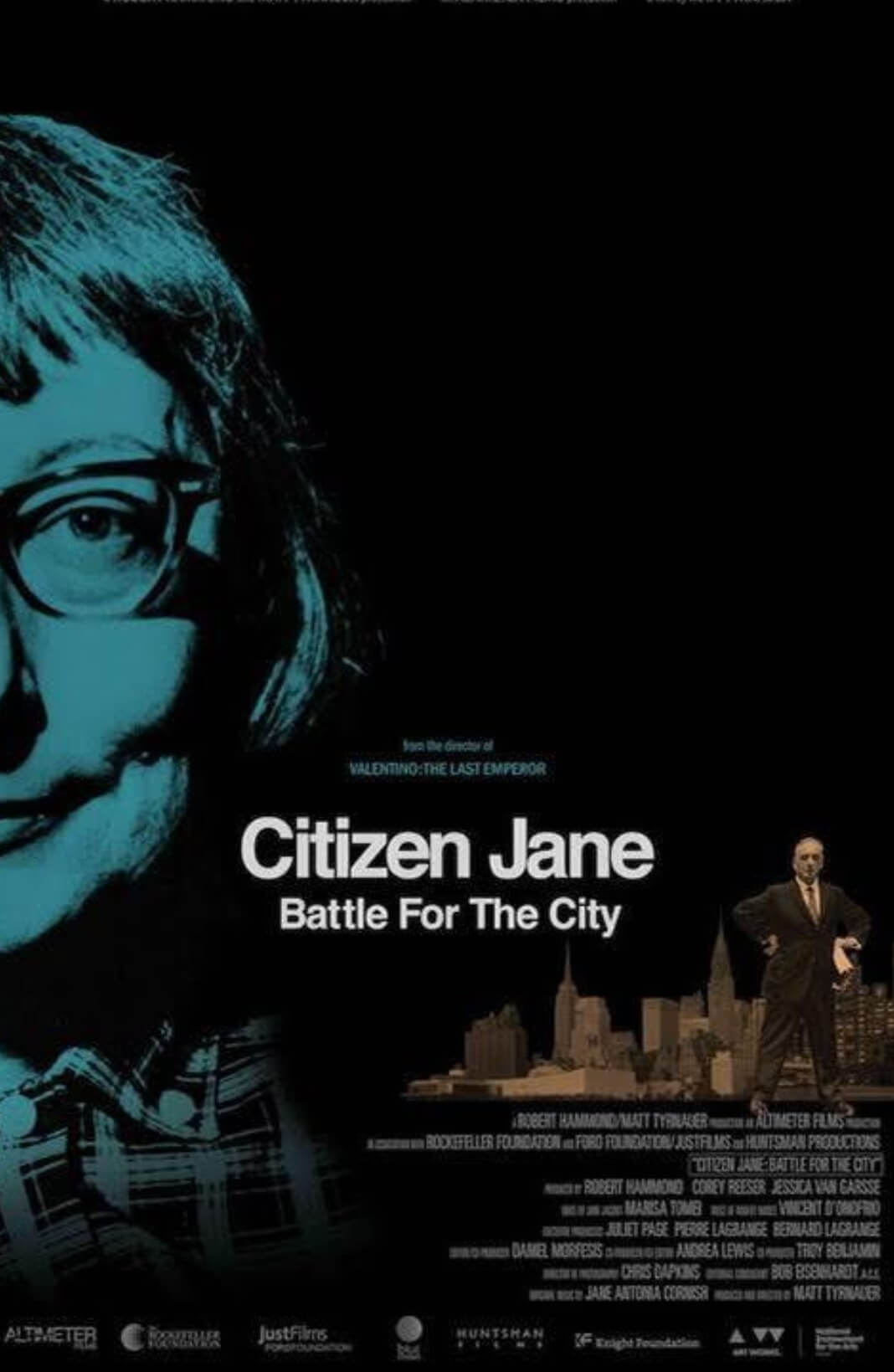 Grab a bench at Washington Square Park and imagine what NYC would look like today, had Jane failed in her efforts. 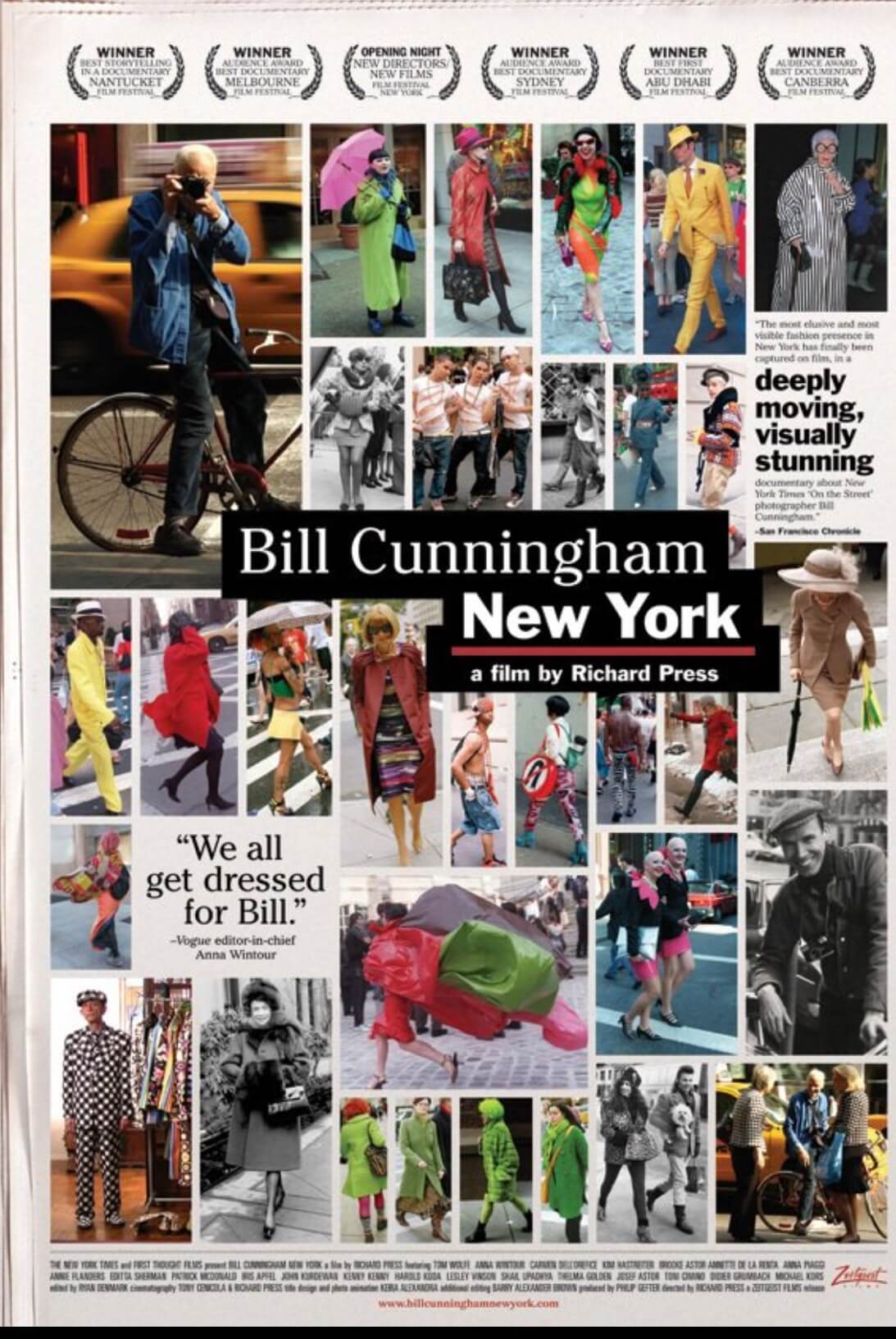 York City fashion photographer.”  Watch this film, make sure you have selected a photo worthy outfit, then go see Bill’s legendary bike and camera at the New York Historical Society.

If you are really into TV and Film, and want to read more, click here for an interesting post about the Creative Director of the Dallas International Film Festival, click here to learn more about the creative team behind the documentary film “Tomato Republic,” and click here to meet one of the funniest film critics around!  xoxo