As a constant student of American History, I always find American battlefields to be very educational and interesting.  Classroom study is one thing.  But actually walking the fields of a former battlefield, seeing the terrain, studying the monuments and markers, really give visitors so much more context to appreciate and understand the importance of any particular battle.

I also enjoy visiting battlefields with my husband, Will.  He is well-versed in the specific details of the Civil War.  And, he participated in many Living History Re-enactments in his 20’s and 30’s.  And his participation in those events has given him an interesting, and more authentic perspective that your average visitor.

When I say I enjoy visiting battlefields, I mean I enjoy them, for about two hours, and then I’m done.  There are visitors who spend hours, and even days exploring battlefields, and no criticism from me.  Roll how you want to roll.  I have written this guide for those who want to see these important battlefields, for a few hours, long enough to hit the high points, and have a moment to reflect on the conflicts that have shaped American History, and then move on. 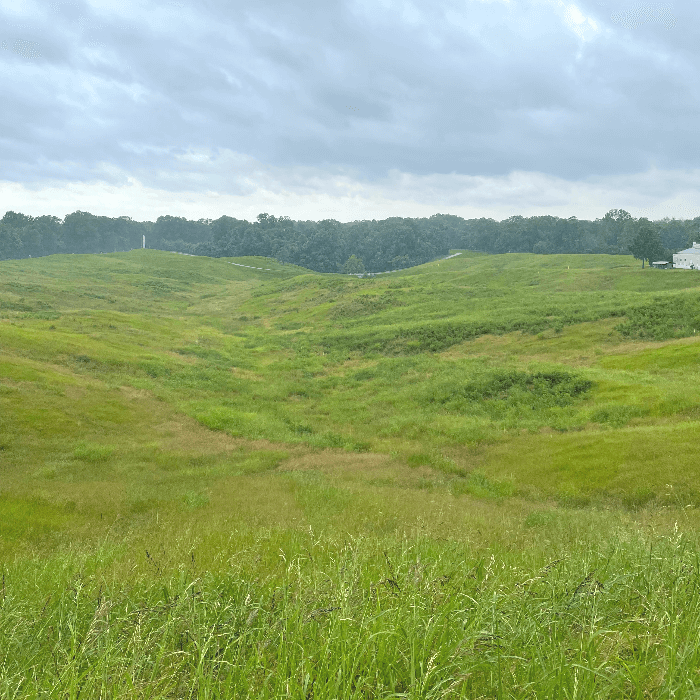 The Vicksburg Battlefield, deep ruts in the fields still visible, where soldiers dug in during the battle.

On our way back to Texas, after a trip to Alabama, Will and I made a stop in Vicksburg to tour the Vicksburg National Military Park.  The day we visited, it was raining, but in this case, that was OK.  The primary way to explore this battlefield is by car.

Why this Battle was Important:  The Siege of Vicksburg was a great victory for the Union, giving control of the Mississippi River to the Union. Around the same time, the Confederate army under General Robert E. Lee was defeated at the Battle of Gettysburg. These two victories marked the major turning point of the Civil War in favor of the Union.

How to Explore the Vicksburg National Military Park:  From Interstate 20, the Visitor’s Center and Memorial Arch Entrance is a very short distance.  I recommend stopping at the Visitor’s Center and watching the overview film, and grabbing a brochure, to guide you as your drive through the battlefield.  This drive is truly gorgeous.  A winding road through huge trees and rolling hills, punctuated on each side with memorial monuments to the dead from states like Alabama, Texas, Ohio and Kentucky, to name just a few.  Some monuments are small and others are huge, and worth pulling over to the side and exploring by foot.  I particularly enjoyed the Illinois State Monument.

I also recommend stopping to explore the U.S.S. Cairo, one of the first American ironclad warships built at the beginning of the U.S. Civil War. On December 12, 1862, the ironclad struck an underwater mine near Blake’s Levee and sank in twelve minutes. Cairo’s remains were raised and salvaged in 1964, and then repaired and preserved by the National Park Service in 1970’s.  It’s very impressive.

Where to Eat:  I’d like to go back to Vicksburg and explore the town more deeply, but I can recommend lunch at Main Street Market!  Fantastic soups and salads, and a daily hot plate special.  VERY good! 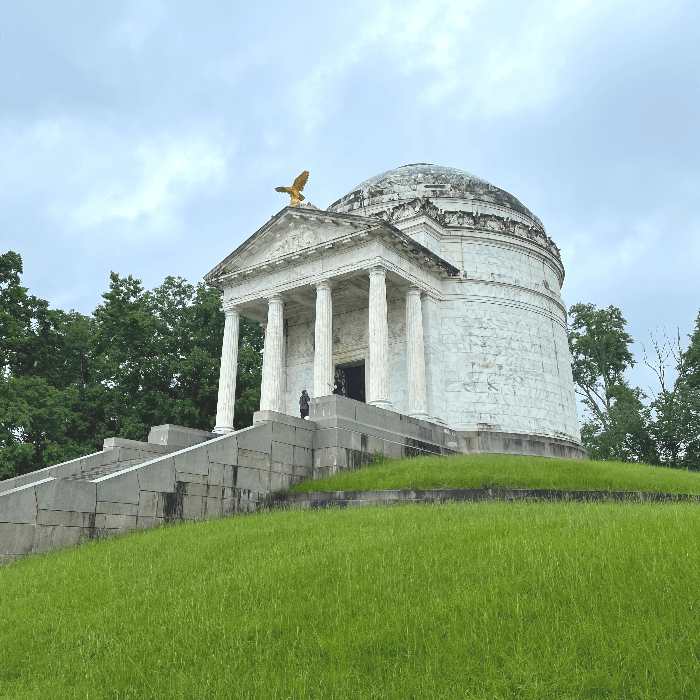 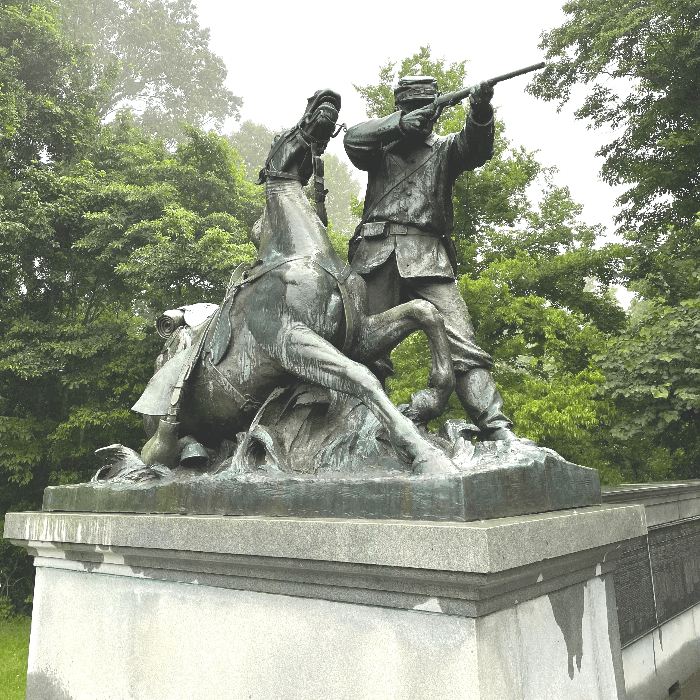 A Bronze Monument in Vicksburg 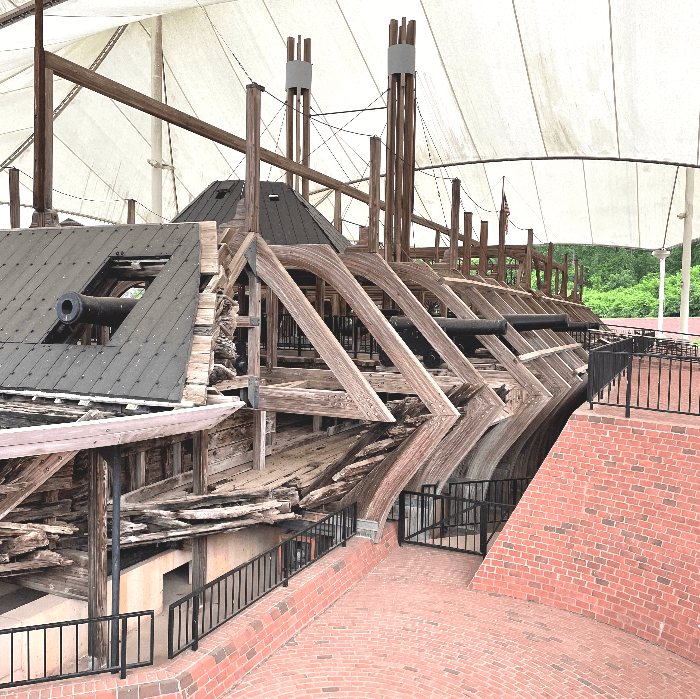 The remains of the U.S.S. Cairo under canopy

When Will and I drive from Texas to New England, we typically pass through Pennsylvania.  In July 2021, we stopped for a few hours, so I could experience the most famous of all the Civil War Battlefields in Pennsylvania, Gettysburg.

Why this Battle was Important:  The Battle of Gettysburg was fought July 1–3, 1863, in and around the town of Gettysburg, Pennsylvania, by Union and Confederate forces during the American Civil War. The battle involved the largest number of casualties of the entire war and is often described as the war’s turning point.

How to Explore the Gettysburg National Military Park:  This is a huge battlefield, and there are many interesting spots to explore.  We had limited time, so we parked in the Soldier’s National Cemetery Parking lot, and then followed the walking path south along Taneytown Rd., cutting across the field to the west to Hancock Ave., and then walked along Hancock Ave. to admire the monuments there.  You can drive, but this is not a large area to explore, so I’d recommend walking so you can really admire the monuments close-up. 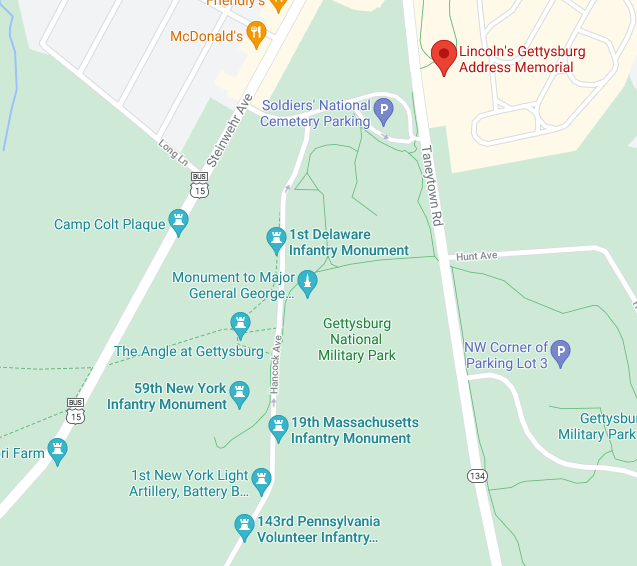 Map of the area we visited at Gettysburg

There are dozens of tour companies operating in the town of Gettysburg, and several buses of visitors passed us while we were there, if you’d like to visit in that way.

I recommend crossing Taneytown Rd. at the point of the parking lot described above, and walking into the the entrance of the National Cemetery, so that you can visit the Gettysburg Address Memorial.  President Lincoln made the speech at the dedication of the Soldiers National Cemetery on November 19, 1863. This is probably the only monument in the world dedicated to a speech.

Unfortunately we did not have time to visit the Gettysburg Museum, which Will has described as a not-to-be-missed site.  Next time! 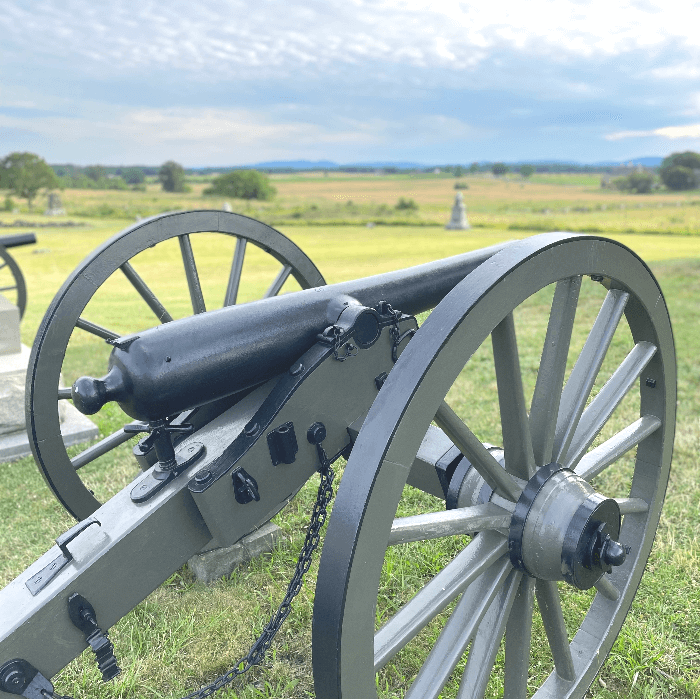 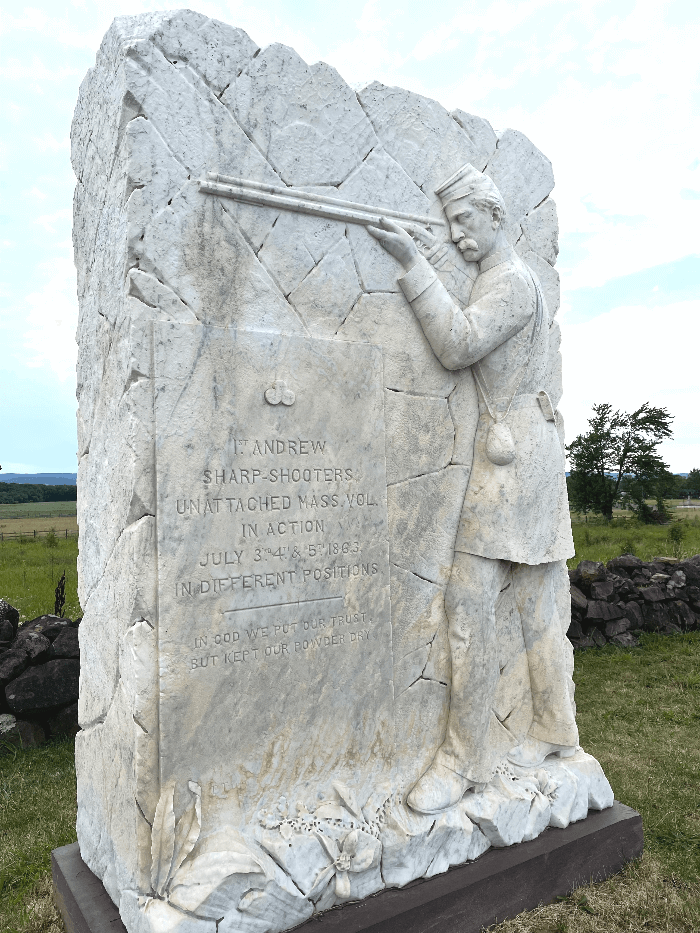 Another wonderful place to visit if you are interested in Civil War History is the town of Franklin, Tennessee.  Franklin is thirty minutes directly south of Nashville.  And, where the Battle of Franklin was fought.

I wrote an extensive post about visiting Franklin, which you can read by clicking here. 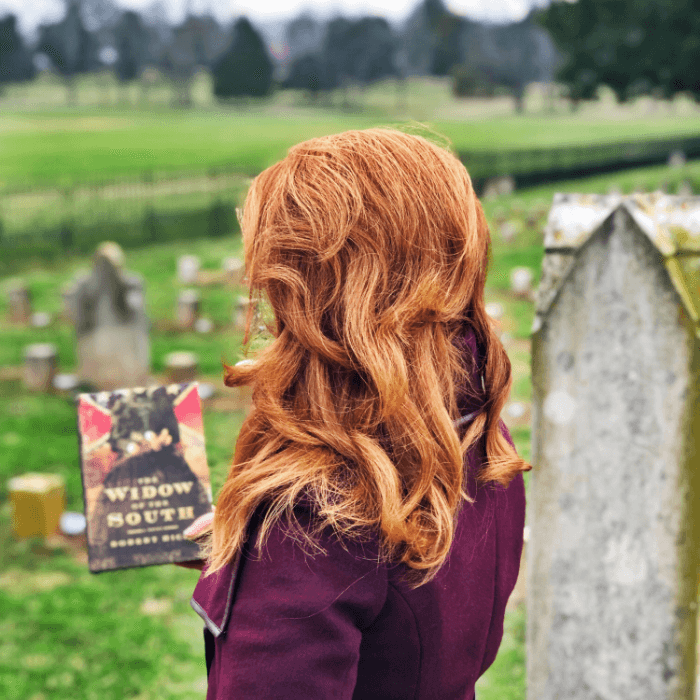 One final recommendation.  When Will and I first started dating, and he told me he used to participate in Civil War Living History Re-enactments, I had no frame of reference, other than the scene in the Reece Witherspoon film Sweet Home Alabama.  Sadly lacking.

He handed me a copy of the non-fiction book Confederates in the Attic, by Tony Horwitz.  In addition to being an interesting and also humorous examination of those who participate in re-enacting, the book also examines the legacy of the Civil War in the South, and how different groups of people understand that history today, and how that understanding fits into modern perspectives.  Highly recommended reading!

I’ll end with a quote from the Gettysburg Address, which seems as poignant today, as the day President Lincoln spoke these words:

that these dead shall not have died in vain,

that this nation under God shall have a new birth of freedom,

shall not perish from the earth.”